Former lovers Ranveer Singh and Anushka Sharma have found new grounds of friendship with their upcoming flick ‘Dil Dhakadkne Do‘. The actors who were last seen together in the 2010 rom-com ‘Band Baaja Baarat‘ reunited five years later with Zoya Akhtar’s much awaited film. 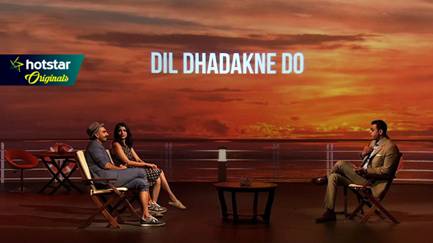 In a recent heart to heart, exclusively for hotstar, Anushka was all praises for Ranveer.

“When we worked together four years ago for Band Baaja Baraat, Ranveer used to be very anxious and hyper on set; he used to do weird things,”

Anushka Sharma, who was his co-star in the film, has said.

“I used to be amused earlier by his behavior. But now he is calmer, less anxious. He’s a better actor now.”

The chat show, Cruising With Dil Dhadakne Do, shot exclusively for hotstar, will be available from Friday, 29th May 2015 for 15-million-plus mobile users, to tell them about the film and its stars. It features the actors in free-wheeling, entertaining conversations sprinkled with reminiscences, jokes, memorable experiences from both, life and the making of the film. The entire episode is full of fun interactions through which fans will also see the stars really let their hair down and speak.