Controversy seems to just follow Pakistani actress, Veena Malik, around!  News has just broken that she and her husband Asad Bashir (of Geo TV) have both been sentenced by Judge Shahbaz Khan to 26 years in prison by an anti-terrorism court!  The allegation for which they, along with Mir Shakil-ur-Rahman (owner of Geo and Jang group) are being sentenced for is allegedly airing a blasphemous program on television back in May!  During the program, they apparently had played a religious song while staging a mock marriage of Malik with Bashir.  The TV host for the program, Shaista Wahidi, was sentenced to 26 years too. Additionally, the court charged them with a 1.3 million Pakistani rupees fine, and has put a lien against their property – i.e. their properties will be sold off in the event they do not pay the fine! 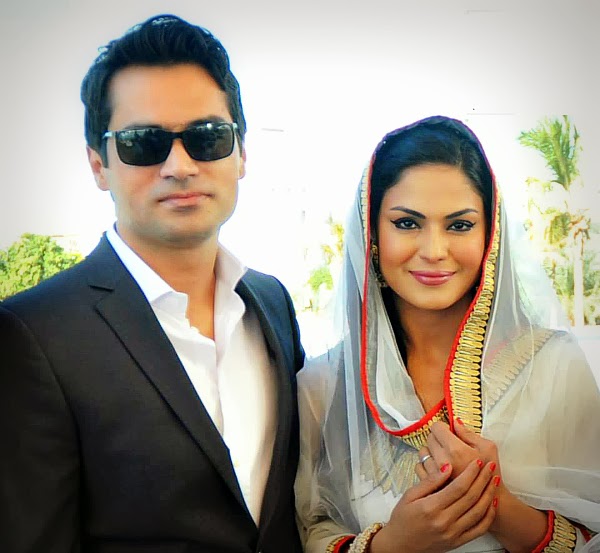 An official revealed that “The judge said in his judgment that the four accused had committed profanity. The court in its 40-page verdict also and asked the police to arrest them.”  It is unlikely that the verdict will be enforced, however, since the Gilgit-Baltistan region is not considered to be a full-fledged province of Pakistan. As such, the verdict is limited to being valid only in that region and does not have any power in the rest of the country. Moreover, none of the accused are in the country at the time!

What do you think of this news? Shocking, right? We hope that the court and the accused are able to resolve this issue!