Pocket Gangsters has created a lot of buzz lately. Actor Madhur Mittal has been praised a lot for his role in the movie. The actor who starred in hit UK television series, ‘Kidnap And Ransom’ has been brimming with joy. His KAR co-actors loved the movie and generously praised the movie, the concept and his acting prowess. 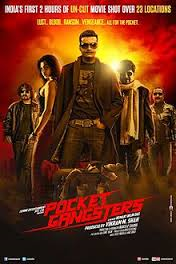 The movie has garnered rave reviews from the people who have seen it. Said to release later this year, the movie raise many eyebrows. When director Hemant met Madhur on the sets of KAR, the latter was mightily impressed by the script, it`s originality and striking resemblance to his current project.

Incidentally, Madhur played a Kashmiri gangster in the show and during narration, the lead actors, Trevor Eve and Helen Baxendale too were drawn towards it. After a hearty discussion, they insisted Hemant to show them the movie once its done. As promised, the director held a special screening for them in Birmingham, UK.

Watching the movie, they were mesmerized. Trevor even went on to say that,

“the movie is very immersive and should been screened at movie fests.”

He was completely blown away by the acting. Helen on the other hand, showered praises on the conceptualization. Making the movie into an uncut film is a big challenge and shooting it in 2 hours flat is a benchmark in its self. They both wished Hemant Nilim Das luck for the future. Pocket Gangsters is a high octane thriller flick directed by Hemant Nilim Das and produced by Vikram M Shah. The movie also stars Raghubir Yadav, Vijay Raaz and Shivangi Mehra and is slated to release later this year under the banner Ciemme Entertainment Pvt. Ltd.