The best part of it being a new year, is that there is new music for you to groove to!  2014 welcomes one of the most exciting collaborations of recent times! Duo Samar and Amar are set to kick off the New Year with their powerful single ‘Jad Tak Hai Jaan,‘ that is sure to not be a bummer (sorry couldn’t resist the rhyming).  The track sees the pair showcase their smooth vocal talents, complementing each other perfectly for this romantic ballad.  Buy on iTunes.

“Jad Tak Hai Jaan” takes the form of a traditional Bollywood classic, but with a twist. Using exclusively Punjabi lyrics set to a captivating melody, Samar and Amar have maintained the best of Bollywood whilst staying true to their Punjabi heritage.  The two are no strangers to the world of music, so you can imagine how joining forces would result in a hot track!

Birmingham-based Samar has grown up surrounded by music. Having achieved great success in his youthful career, penning his own hits such as ‘Mukhara‘ and ‘Tu Hi Tu‘, Samar is back to take on a softer, more mellow tip with “Jad Tak Hai Jaan“.

Speaking about the collaboration, Samar says:

“The track is quite different from what I’ve done before but I’ve really enjoyed being part of the process of putting it together. It’s been a lot of fun and I can’t wait to see what the reception will be like.”

Meanwhile, Amar catapulted to fame as a teenager with her hit single ‘Tu Hai Mera Sanam‘, a Hindi cover of Dolly Parton’s I Will Always Love You (also famously covered by Whitney Houston). The talented singer/songwriter quickly became known for her sultry voice, Hindi lyrics and classical singing style and carved a successful career in music.

Regarding the collaboration, Amar, tells us:

“It’s been an absolute pleasure to work with Samar for the track. It has a real romantic vibe, but we’ve made it different with our use of Punjabi lyrics, which is something I hope everyone will appreciate.”

Amar has worked with many notable names such as the super-producer Timbaland who has created masterpieces for the creme de la creme of the industry including Justin Timberlake, Missy Elliott, Nelly Furtado, Black Eyed Peas, Rihanna, Madonna, 50 Cent and Jenifer Lopez, to name just a few. Amar is currently working with yet another renowned producer Jim Beanz on her next studio album. 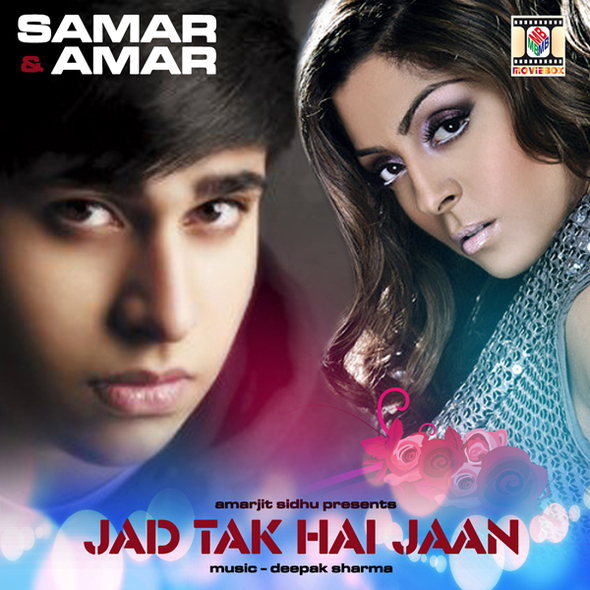 Amazing vocal talent isn’t all that Samar and Amar have in common. Both stars were born with music in their genes!  The release sees music legends Amarjit Sidhu and Mangal Singh reunite vicariously through their respective children, Samar and Amar!

Inspired by the hit Bollywood film “Jab Tak Hai Jaan”, “Jad Tak Hai Jaan” was conceptualized by both Amarjit and Mangal. Commenting on the birth of the song, Amarjit says:

“Mangal and I went to watch Jab Tak Hai Jaan in the cinema. As musicians we enjoyed the music but felt that there should have been a big number which every Yash Chopra film has. We both sat down and put our thoughts together and came up with the melody. After that, we showed both Amar and Samar who loved it and wanted their own input.”

Deliberately steering clear of any western influences, Jad Tak Hai Jaan is the true epitome of the richness of Indian culture, which is reflected in the video. Filmed entirely in the exotic streets of Mumbai, the video relates a traditional love story. Renowned director Ranjit Swamy, who has previously worked with big names such as ‘Arminder Gill’ and ‘Honey Singh’, was commissioned for the shoot.

Let us know your thoughts on this new track!