As you know, based on reading my posts, I like to share with our readers any innovative, creative, charitable, or inspirational causes.  A couple weeks ago, a friend of mine in the media world brought to my attention a movement called “Shor” that is a forum for South Asians who consider themselves to be part of the LGBTQ communities.  I have friends (and South Asian friends) who identify as LGBTQ.  So, I thought it was interesting that there was a site focused specifically on the South Asian LGBTQ community, and thought it was worth sharing with our readers.  The site, “Shor” was founded by Aashi Gahlot.  We had to do this as a two part feature, since she had lots to say!  Read on below for Part 1 of this truly thought-provoking interview.  Part 2 will be posted tomorrow.

Roopa: What inspired you to create “Shor”? Why did you choose to name the movement “Shor”?

The inspiration behind Shor is the vision to eradicate homophobia through creativity.

In Hindi, “Shor” means to make a noise, to break the silence. This is exactly what Shor aims to do. Through our creative works, we are sure Shor to break the silence surrounding LGBTQ South Asian lives.  From my experiences as a British Asian lesbian, I have found homophobia to spring from the misunderstandings, the ignorance and the silence that hounds homosexuality.

I was disowned from my family, my sexuality being the catalyst. I did not have any contact with my family for four years. Shor stems from a very deep place within me. Being a writer, I have experienced the power of creativity. Creativity is a means through which we can change the world.

My experiences have propelled me to make a change and educate South Asian society through Shor.

When I came back home after those four years, I had to face the entire South Asian community I grew up with. There were some who brushed the matter under the carpet and were pleasant to me. Some people ignored me. There were long stares, smirks by others and a stifling feeling of uneasiness.

I reached out to someone in my family about this, only to get the reply: “You can’t stop people talking- that’s just how it is.” I refuse to believe that things cannot change.

It has taken me a long time to understand how homophobia has impacted my family.

I was told that when I was away, my father would come to London and walk the streets to search for me. My grandfather at one point, took the deities and photographs of God out of the family altar and began to throw them away. He said that he had lost faith in God. My grandmother was brought to tears when her gossip hungry friends would pester her asking about me.

Homophobia and ignorance towards LGBTQ matters is serious. It is not something that can be ignored.

The reason behind choosing creativity to challenge the misunderstandings and the silence is because I believe creativity allows a form of expression that holds a human aspect: the victories, the defeat, perseverance and strength are human stories and something that we can all relate to- this is what Shor reflects.

The trials and tribulations of life are not limited to a particular sexuality. Shor strives to highlight that being LGBTQ is being human- we are not abnormal and we are not different. Shor shoots down the misconception of being LGBTQ as “un-natural”.

Roopa: What do you hope to accomplish with “Shor”?

Aashi: Shor aims to help bring the ending of homophobia through understanding and acceptance- not mere “tolerance”.

Our stories portray how the misunderstandings and stigma can make life for LGBTQ South Asians a struggle. However, some stories and interviews reflect that acceptance and understanding is a possibility. Through our work, we aspire to instil hope, support and perseverance in others facing LGBTQ issues.

Imagine not being able to connect with your family because of something that you cannot change- something that is a part of you. Many LGBTQ persons from the South Asian community worldwide feel “dirty” and isolated- not deserving to be a part of the community because of the stigma and shame associated with being LGBTQ. This can change through challenging homophobia.

We are not just a resource for LGBTQ South Asians and supporters, but also for the homophobic. We aspire to portray perspectives and experiences that homophobic people may not have had the opportunity to explore before; thus through our work homophobic persons have the chance to understand LGBTQ lives better and perhaps be encouraged to choose not to be homophobic.

It is my dream that through Shor, LGBTQ persons will be embraced for who they are and have their love and lives celebrated.

Shor reflects that people are people and that love is love. Being LGBTQ does not make you an alien or abnormal in any way. Sadly, especially with Section 377, this is how being LGBTQ is re-asserted.

I set up Shor in the UK around a month before Section 377 was re-implemented in India. A friend of mine commented that I shouldn’t be upset as I am born in the UK and that Section 377 cannot impact me. However, I know better.

Section 377 is a dangerous law that re-asserts homophobia. This affects every single human right and human being across the globe.

We have a section entitled, “Shor to tackle Section 377”. Through this, we aim to help abolish not only Section 377, but also the misunderstandings and stigma surrounding being South Asian and LGBTQ through our work and determination. 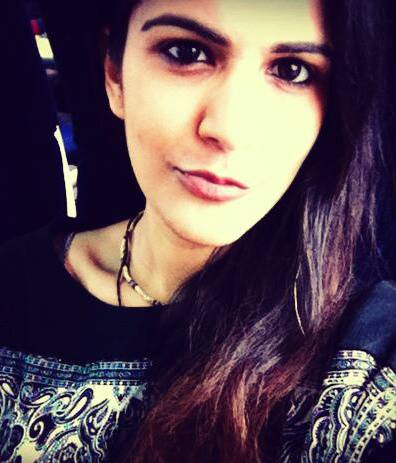 Roopa: In your opinion, what are the biggest challenges that those in the LGBTQ community are facing today?  Specifically, what challenges do South Asian LGBTQ members face – in India and abroad?

Aashi: In my opinion, it’s the shame, stigma and the misunderstandings associated with being LGBTQ that are the challenges facing LGBTQ South Asian persons worldwide.

Let’s begin with the issue of “shame”. As we all know, family honor is a prominent aspect of being South Asian. I know of people who opt for a “marriage of convenience”, a “MOC”. This is where, for example, a lesbian South Asian marries a gay South Asian. They have a fabulous wedding- but it is all a farce. They have pretended to their families that they are heterosexual. I get it. I absolutely feel the plight of “shaming” your family- of having the whole community talk about you and your parents behind your back. But, if a person is ashamed or feels like they have to hide who they are, how are they going to be accepted by others?

Another challenge that is faced within the South Asian Diaspora and back in India is the misunderstanding: the whole notion of homosexuality being a “western import”. South Asian parents in the Diaspora may blame moving away from India as the reason their child is LGBTQ; whereas parents in India may blame the media influenced by the West and “corrupting” their child. Being LGBTQ needs to be highlighted as natural and as love.

Besides, how can love be imported? It is ridiculous. If we are going to bring the British into this, then I agree with academics Ruth Vanita and Saleem Kidwai of the anthology, “Same Sex Love in India”- that homophobia was a western “import” through Section 377, rather than homosexuality. 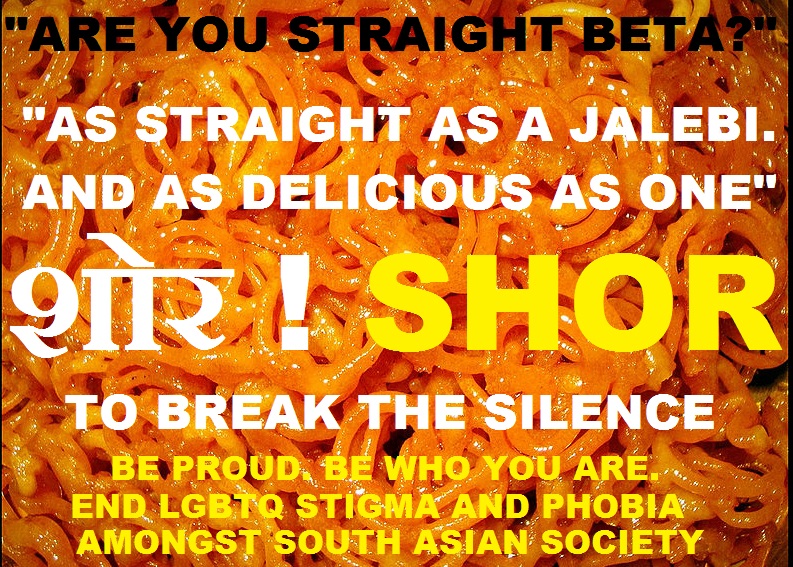 Roopa: What is the best way, in your opinion, to overcome these challenges that you list in question 3?

Aashi: Refuse to be ashamed – Reclaim and celebrate who you are:

People need to be brave, be who they are and to not hide. No more marriages of convenience. Marriage is sacred and should be with the person you love. Despite what anyone says, you are not shaming your family because of being LGBTQ, or refusing to marry that “perfect” boy or girl your aunty in India has discovered to save the family name. Talking to your family and being honest in a safe atmosphere is the only way to bring about change and giving yourself and your family the chance of an honest life. Emphasize that you are the same person, your sexuality is a part of you and does not change who you are.

Once people begin to understand that being LGBTQ is a part of society, the stigma and homophobia will diminish.

Tackle the stigma through media:

Another aspect of overcoming the stigma and misunderstandings is to not only have LGBTQ persons, but supporters speaking out too.

The South Asian media, through films especially, need to convey LGBTQ matters sensitively- strictly without homosexual or transgender jokes and making a mockery of the LGBTQ community. When being LGBTQ is presented insensitively through media, this not only reasserts the shame, stigma and misunderstandings but strengthens the stereotypes. This fuels and encourages LGBTQphobia.

There have been films such as “Fire” by Deepa Mehta (1996) and “Dunno Y… Na Jaane Kyon” by Sanjay Sharma (2010) that sensitively portrayed homosexuality.  I am also aware that a drama series telecast on Star Plus dealt with a homosexual story line through “Maryada” (2011). This is a great start but needs to grow.

The world, the South Asian community worldwide need to be exposed to the truth of LGBTQ persons through media as this means is an integral part of many family lives.

I have found myself in heated debates with other LGBTQ persons on whether “coming out” is important or not. Some have argued that rather than “announcing” that one is LGBTQ, the person should just be who they are and let others discover this naturally.

However, I feel that coming out is important. It is important to reclaim being a “lesbian” or “gay”- by stating who you are is a bold move that rejects the negative connotations and shame associated with being LGBTQ. Coming Out is not seeking approval but is a chance to support your loved ones through questions they may have.

Ultimately, whether people choose to “announce” a coming out, or not, is not so important in the big picture. Coming out is a personal choice. However, what is most important is that we create a world where people can be themselves completely without fear or intimidation. This can only be done by being yourself and being honest. Once this is done, will coming out be such an issue?

I heard something ridiculous recently- that LGBTQ persons do not contribute to Indian society. This emphasizes the mentality of seeing being LGBTQ as abnormal. What people don’t realize is that any one of their friends, colleagues, people who they have interactions with in society- be it professors, doctors, accountants may be LGBTQ.

It is because of the stigma, misunderstandings and fear of being LGBTQ that creates obstacles for these persons to being completely whom they are. Once again, education through being honest, sharing experiences however you can, is a way to overcome the ignorance.

Don’t forget to check UrbanAsian tomorrow for Part 2 of my interview with Aashi!