Mohit is a marketing whiz kid vying for a step up the career ladder…Mayera – a financial brain with a penchant for shoes… They’re a young middle-class corporate couple that’s ambitious and likes the good life too.

Ayushmaan is back on screen and with the lovely Sonam Kapoor! They work hard, they party hard. They’re also passionately in love with each other. Their belief: You can live on love and fresh air…Their obstacle: Mayera’s wilful bureaucratic father V.K Sehgal. 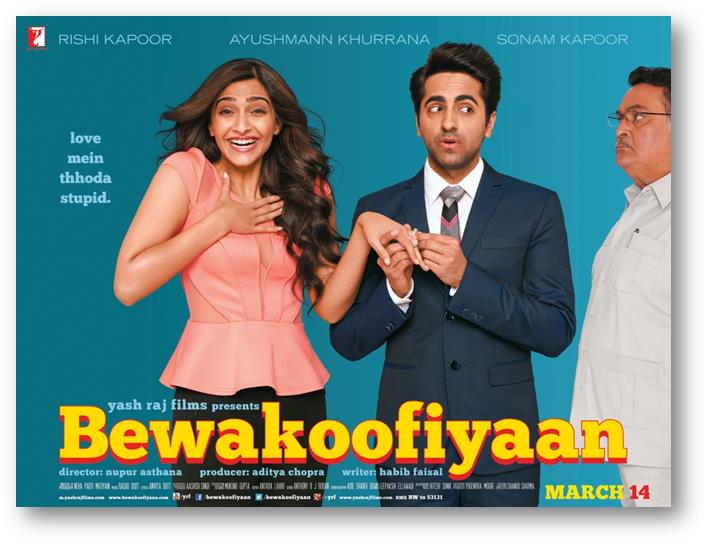 The obstinate old man believes that only a rich man can bring Mayera happiness and a mid-level executive like Mohit simply isn’t good enough! Exactly how fragile are relationships in these times where consumer lifestyles dictate their very nature and intensity? Who gets the last laugh when recession strikes and the lack of money tests love… credit-card-junkies private-sector Mohit-Mayera; or safe-playing sarkari, V.K. Sehgal?

BEWAKOOFIYAAN is a contemporary slice of life story which turns set notions about relationships on their head is directed by Nupur Asthana and has been written by the versatile writer/director Habib Faisal. The film is produced by Aditya Chopra. This is Nupur’s second film for the Studio, after her successful directorial debut last year with Mujhse Fraaandship Karoge, under the Y Films banner.