The recently released high energy trailer of ‘Gulaab Gang’ has already caught fancy of die hard fans and the industry, alike. Words of appreciation have been pouring in from all quarters.

Shah Rukh Khan too, recently, expressed his enthusiasm at the thought of the two Bollywood divas sharing screen space. The king of Bollywood, who has starred in innumerable films with both, Madhuri and Juhi, recently tweeted,

“@anubhavsinha too excited about Gulab Gang. My two favouritest actors coming together..drool time just at the thought of it. All the best.”

It seems that even Shah Rukh can’t wait to get his eyes on ‘Gulaab Gang’, so much so that he poured out his feelings on the popular social networking platform. Bollywood biggies like Farah Khan, Riteish Deshmukh, Arshad Warsi, Dia Mirza, Nikhil Advani, among many others, have also had words of praise for the trailer and the stellar cast. With very little time for the movie to hit the screens, the energy is palpable, for sure. 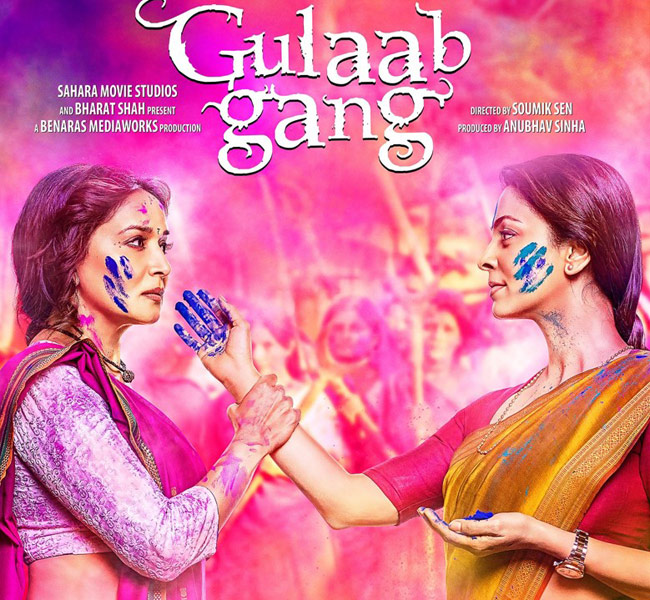 Produced by Anubhav Sinha, Gulaab Gang is presented by Sahara Movie Studios & Bharat Shah and is a Benaras Mediaworks production, directed by Soumik Sen. Starring Madhuri Dixit and Juhi Chawla, the movie will hit theatres on March 7th, 2014. The buzz is amazing and getting so much love that we are excited to see both ladies back on screen once again!