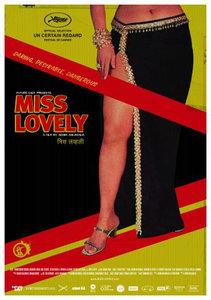 Earlier along with huge A Lister Bollywood film posters on the street-walls, We also used to witness some Trashy C Grade film posters such as “HeeraBai”, “Khauf Ki Raat”, “Dulhan Bani Daayan” etc. Some of us might had went and seen such films (Maybe). Such films are also a part of Bollywood (I don’t care if anyone agrees or not). Who makes such films? Who acts in such films? If a Rowdy Rathore is a 100 Crore Club, Which clubs do these films belong?

When I heard Miss Lovely was about the C-grade film industry in the 80s, I was very excited to see the film and had hold all my desperate horses. But as soon as the film started, I wanted to use a Gun on my Head because all i was watching was a “Love Story”.

According to me, Miss Lovely is a perfectly set example of wrong PR and wrong Promotions. (PS: PR and Promotions are handled by an individual or a company who helps your film or a product to reach it’s right audience).

Vicky (Anil George) and Sonu (Nawazuddin Siddiqui) are two brothers who makes low budgeted films with adding snuff and porn in them. How do they do it? It wasn’t explained, Sorry. They both run Duggal Cine Combine from a hideout and makes illegal sex films for shady producers, financiers and distributors that are in the game for reasons other than cinematic. They make films from Hide-Out? Are you kidding me? Kanti Shah, Chandni Gupta, Mohan Bhakri, Pappu Bahroz never made any of their films from any Hide-Outs! They made their films boldly and proudly and are still ready to face the Media if questions raised.

The younger brother Sonu wants to make a simple Romantic Film. Sonu meets a wannabe starlet Pinky (Niharika Singh) and falls in love with her. Pinky is full of mysteries and questions. Suddenly another track bumps in where Vicky has dumped a fading C-grade actress Poonam (Zeena Bhatia) and taken a new girl Nadia (Menaka Lalwani), under his wings. Vicky also falls for Pinky.

I am very much sure that you (Readers) don’t want me to proceed with the rest of the story as you all are intelligent enough to smell that you have seen this film many times earlier with a different cast.

If i speak about performances, Nawazuddin Siddiqui is outstanding as usual. Niharika Singh shows tremendous effort. But it is Anil George who walks away with the cake with his superb acting skills. Zeena Bhatia is another Killer performer to look forward to! She was terrific.

Director Ashim Ahluwalia brings in a perfect story which we all want to hear. The PR Machinery (Of Miss Lovely) also made me excited. But after watching the film i had few questions of my own. Is the Director scared to portray the Truth? Why is the Director telling you a half baked Truth? The result, I never understood the Truth!

The Camera work and Production Value are simply superb! The Editing was very draggy. It made the pace very slow.

I have my own doubts if an “Art House” movie lover will enjoy this film.

Miss Lovely has very bleak chances to make you understand it’s story or concept. Miss Lovely doesn’t look lovely at all. Thanks to the misleading PR and Promotions!