As the excitement for the release of ‘BOSS’ continues to increase in the eastern hemisphere, the western hemisphere is also getting ready to witness this action-thrilled movie, starring Akshay Kumar! Boss will be releasing in Latin America!

Unlike any other Indian movie, Boss will be the first to release in non-traditional Panama. Krian Media Ltd will be internationally distributing the film throughout Panama, Peru, Denmark, and France- in addition to the 400 screens already market announced across Europe, North American, South East Asia, and Australia! The expected release of the move in most international markets is said to be on October 16th, 2013.  The release date is not only significant for the movie itself, but also for Indian cinema opening up a new non-traditional territory in Panama. 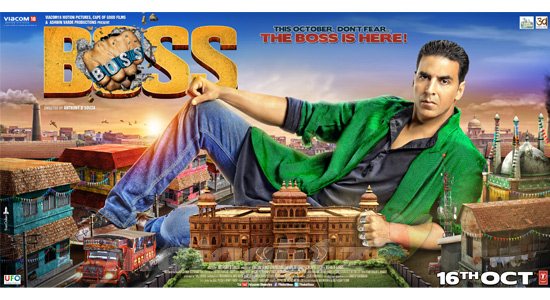 One of the key challenges and per-requisites of good distribution in the international markets is the ability of the distributor to open up new markets as it just helps ensure reaching out to a wider audience base but also helps broaden the revenue pie. It thus is a matter of immense pride for us that not only have we been able to ensure a pretty wide 400 screen international release for BOSS across Europe, North America, South East Asia and Australia, amongst other markets but have also opened up the non-traditional Latin American market of Panama to Indian cinema.”

Produced by Viacom 18 Motion Pictures, Cape Of Good Films and Ashwin Varde Production while directed by Anthony D’Souza, Boss is an action comedy starring Akshay Kumar and Aditi Rao Hydari.  With a completely unique, action-packed story, the film is surely worth every second of its wait!