Banta is ready to release his debut album, ‘Too Damn Desi ’ on T Series which features some of Punjab and UK’s finest and most popular singers from KS Makhan, Mangi Mahal, Balkar Sidhu, Lucky Sidhu, Nirmal Sidhu, Kiran Dhanoa and Jaswinder Daghamia. He is one of the rare UK based producer to be signed to T Series one of India’s largest record labels who will also be releasing the album in India at the same time. Check out the track Panj Koha from the new album!

The 11 track album took three years to produce because Banta wanted to ensure the lyrics, music, singers were all in place and everything blended in this project. Banta is no stranger to the music industry he released four singles, Menu Supne sung by Didar Sandhu and Aman Noorie, Dil Vich with Lucky Sidhu, Lal Chura by Sajal Sehgal and Gussa by Brit Asia Superstar finalist Gussa Lucky Sidhu. 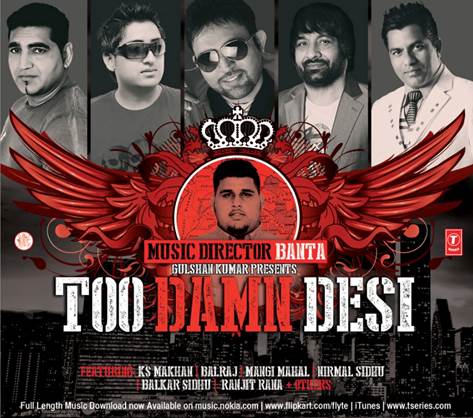 Banta has teamed up with India’s strongest record company T Series to put together a unique but Desi album for fans across the world. The singers used in the album range from UK and India to give the album a world sound.

“The hard part of bringing out an album is the financial side, we artists spend thousands of pounds doing videos to a high quality, spend money on marketing, advertising and the list goes on, it’s a humble request that if you like the album PLEASE download it legally and support” – Banta

Too Damn Desi is out now Worldwide on T Series, check it out!