Rishi is a highly respected name in the music scene and has made waves in the industry in the UK, US and India. Rishi has worked with a breadth of artists across the globe, including Mary J Blige and Britney Spears. However, he is perhaps best known for pioneering the Asian R‘n’B fusion genre in the UK, creating The Rishi Rich Project with Jay Sean and Juggy D.

This is not Rishi’s first time working on films as he has previously produced songs for Bollywood blockbusters. He has worked with leading names in Indian cinema, such as Yash Chopra on Hum Tum and Sangeeth Sivan on Kya Kool Hain Hum.

Rishi’s talent in music production is what led director Atul Malhotra to approach him for the film’s score. For Rishi, the collaboration is incredibly timely. Following his global success in the music industry and after working on several Bollywood movies, Rishi made the conscious decision to combine his passion for music with his love of film and turn his talents to scoring. 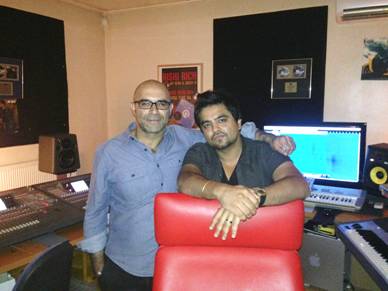 Rishi Speaking about Rishi’s involvement in the film, Malhotra says:

“I feel deeply honoured to have Rishi become a part of the Amar, Akbar & Tony family. He is an incredible producer and definitely perfect for the film. He knows his music and most importantly, understands youth culture in the UK. I can’t wait to start working with him.”

Amar, Akbar & Tony wrapped up filming this June and is getting ready for release in 2014. Rishi commented on his role:

“I have wanted to explore film scoring for a while and although I have experimented in other projects, I am particularly excited to work on Amar, Akbar & Tony. The film reflects London culture, a subject I’m particularly fond of so I think this will be a great partnership.”

We are very excited for him! Stay tuned for more about the project and the upcoming film!