Turns out, it’s not just the likes of you and me who are in awe of Madhuri Dixit’s dancing.  Our sources shared with us a rather cute story regarding a celebrity getting star-struck with Madhuri Dixit!

The story goes like this, Anushka Sharma had just received her best supporting actress awards at the IIFA 2013 in Macau and had gone back stage to do some quick interviews.  While she was mid-way interviewing, she heard some clips from Madhuri Dixit’s dance music playing.  Immediately, she asked the organizers if Madhuri’s performance was next and when it was confirmed to be true, without a care for her designer gown, she bolted across the backstage area to join the audience to watch Madhuri’s performance. 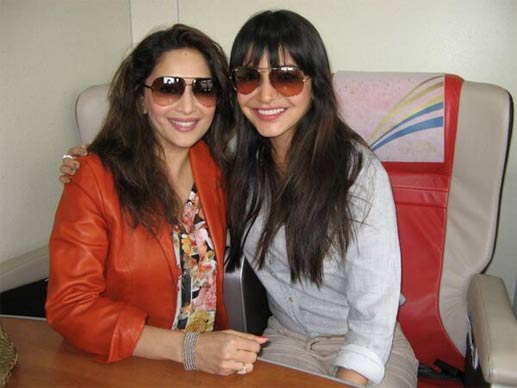 Anushka believes that Madhuri is an outstanding performer and is a huge fan!  As such, she did not want anything to stand in the way of her first opportunity to watch the dhak dhak girl live!  So much so, that in her haste, while she was running, she tore her beautiful Roberto Cavalli dress!  Hopefully, Cavalli won’t mind, since he has reached out to her in the past to compliment her on how lovely she has looked in his clothes.

It is really heartening to see the love and adulation shared between the stars, and it is even sweeter that despite being a star in her own right, she can still maintain her child-like enthusiasm for her childhood inspirations like Madhuri Dixit.  Perhaps soon, we will be able to see these two dancing divas share a stage together!