Ang Lee’s amazing adaptation of Yann Martel’s novel, “Life of Pi” won the heart of audiences from the opening show in theaters.  The movie received accolades for its story line, acting, and of course, cinematography!  Winner of four Academy Awards – the most of any film this year – this ground-breaking and breathtaking motion picture returns to theaters for a limited time only this Friday, July 19, 2013 (see below for list of cinemas showing the film). Cinema fans who missed the critically acclaimed film on the big screen have one last chance to see it in the way it was meant to be seen. 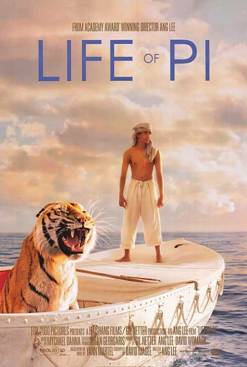 Suraj Sharma, Irrfan Khan, and Tabu star in the movie adaption of “Life of Pi”, based on the best-selling book!   The book considered unfilmable until Lee took on the daunting challenge.  His remarkable efforts resulted in an Oscar win for Best Director this past February.  Based partly in India, the film also won Academy Awards for Cinematography, Visual Effects, and Original Score and became a global blockbuster with movie fans everywhere grossing more than $600 million worldwide.

“Life of Pi” opens on Friday, July 19, in the following theaters. Check local listings for showtimes and 2D/3D format options.

Screenplay by: David Magee, based upon the novel by Yann Martel

Director Ang Lee (Brokeback Mountain, Crouching Tiger, Hidden Dragon) creates a groundbreaking movie event about a young man who survives a disaster at sea and is hurtled into an epic journey of adventure and discovery. While cast away, he forms an amazing and unexpected connection with another survivor…a fearsome Bengal tiger.