The title says it all Bhaag Milkha Bhaag! But what is this movie all about and why is Bollywood loving the tracks and trailer all of a sudden? B-town is raving about the film which has not even been released. The movie is all set to release on July 12th!

Award-winning filmmaker Rakeysh Omprakash Mehra who was the star winner of Rang De Basanti starring Aamir Khan returns with his newest film BHAAG MILKHA BHAAG telling the true story of the “Flying Sikh” – world champion runner and Olympian Milkha Singh.  The movie is played by actor Farhan Akhtar, Singh overcame the bloody massacre of his family, civil war during the India-Pakistan partition, and homelessness to become one of India’s most iconic athletes. BHAAG MILKHA BHAAG, which also stars Sonam Kapoor and Art Malik! 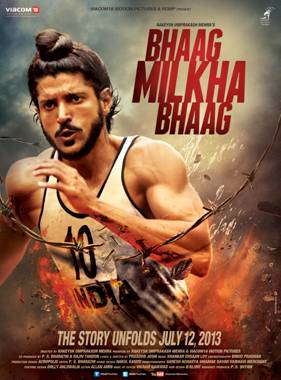 What’s the movie about well it’s about a historical figure man named ‘Milkha Singh’ and for some the name evokes a faint memory from the pages of history.  All that is most remembered is that Milkha Singh, hailed as the Flying Sikh, was a famous athlete who infamously lost the penultimate race of his life. “The one who lost the 400 meters finals at the Rome Olympics” is an involuntary response when the name Milkha Singh is mentioned. The film attempts to understand a catastrophic loss that was deemed a sure victory and explores through the darkness of disgrace; Milkha’s redemption, the redemption and catharsis that come when he confronts his past.

Milkha ironically finds himself in a place wherein he had lost his all – Pakistan – a place where he witnessed the bloody massacre of his entire family. The demons hidden in some dark corner of his consciousness come alive. This iridescent tale winds through the plagues of a bloody civil war, a lost childhood, homelessness and petty crime to victories hard won and easily lost. It draws an intricate image of human trials, setbacks and fate leveraged against the sheer power of will.  He evocatively illustrates that true victory lies in racing with one’s troubles and not in running away from them. Milkha flies, falls and rises, bruising his soul but not his will to survive. Milkha Singh the world champion in 400 meters lost the most important race of his life – the 1960 Rome Olympics – but won in LIFE!

Sounds like a historical yet thriller film! Be sure to check out the music as well as we are enjoying all the tracks and especially Zinda!