Zee TV’s India’s Best ‘Dramebaaz’ has captured the hearts of audiences worldwide making it the No 1 non-fiction show in Indian television. Dramebaaz show-cases adorable litter five to twelve year old contestants who displaying their innocence and unique acting talent. Their “adorableness” is the creation between the three judges: Anurag Basu, Sonali Basu, and Vivek Oberoi and last but not least the audience. The hosts Ritwik Dhanjani and Ragini Khanna are the talk of the town. Top eighteen have been selected and this Saturday, March 16, will unveil the Grand Premiere with Bipasha Basu as the celebrity guest. 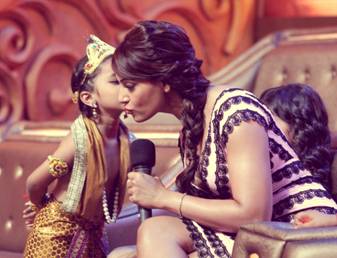 Backstage insight: Li’l Zenith Patel was over the moon when his favorite actress Bipasha Basu asked him for a kiss on the sets of Zee TV’s India’s Best Dramebaaz. The five year old had a big smile with little blushing one his face as he saw Bipasha Basu walk onto the sets of the show. When asked the reason for his ear- to-ear grin, the li’l kid quipped, “Kyunki main bachpan se hi Bipasha di ko pasand karta hoon!” 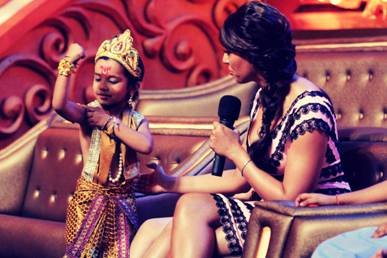 Once his act was over, Zenith couldn’t hold back from taking full advantage of his only chance to talk to his favorite actress. While judge Vivek Oberoi was still giving his comments about the group act that the kids had put up, Zenith suddenly interrupted him saying “Bipasha di, aap bahut khoobsurat ho, mujhe aapki aankhen bahut acchi lagti hai!” Quite taken aback at hearing what the tiny li’l five year old had to say, Bips turned a beetroot red and thanked him for his sweet compliments. 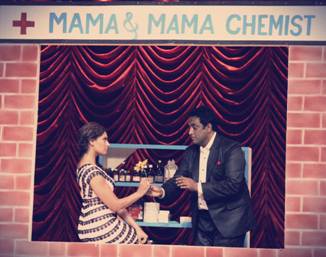 The sets of India’s Best Dramebaaz was full of fun and masti as Bipasha Basu and her co-star Baby Doyel shook a leg with the judges and contestants alike. At the insistence of Sonali and the rest of the contestants, Bipasha joined Anurag onstage to enact a cute romantic scene. Much to the amusement of the kids onstage, the performance ended with Anurag getting a playful slap from Bips!

Watch all the fun and drama on Saturday and Sunday at 7.30pm only on India’s Best Dramebaaz on Zee TV, Sky 788.