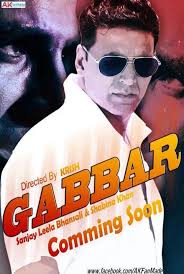 Akshay Kumar will grace the silver screen once more when he teams up with acclaimed director and producer Sanjay Leela Bhansali for the film Gabbar. The film is a remake of the hit Tamil film ‘Ramanaa’ (2002). More Bollywood remakes – but why?

The two talents reunite as megastar Akshay plays ‘Gabbar’ in cutting edge producer Sanjay Leela Bhansali’s film. Anticipation builds as the duo will recreate the magical partnership that occurred for their ultra-successful film Rowdy Rathore (2012). The film crossed the 100 Crore benchmark at the box office and was the first time the two ever worked together.

There is no stopping the awesome duo as together they will once more create movie magic in Gabbar.

The box office breaking duo hit the elite 100 crore bench mark in 2012 with Rowdy Rathore. The film ‘Ramanaa’ retitled ‘Gabbar’ for the Hindi version is set to storm the box office again and will be no exception in the Akshay’s film reel of successful ventures.

Akshay’s involvement in his film projects such as Special Chabbis most recently have proved him not only to be worthy of his successes but demonstrates his ability to perfect every genre of film that he stars in. Behind the camera, Akshay is also proficient as a producer, and together with his business partner Ashvini Yardi for Grazing Goat Pictures, has expertly sought out and made critically acclaimed films to tap the niche regional Indian cinema genre, amongst which was the National award-winning OMG: Oh My God.

The hard-working Akshay never rests on his laurels, and is already shaping his next cinematic venture, a film with eclectic director Karan Johar, titled ‘Gutka’.