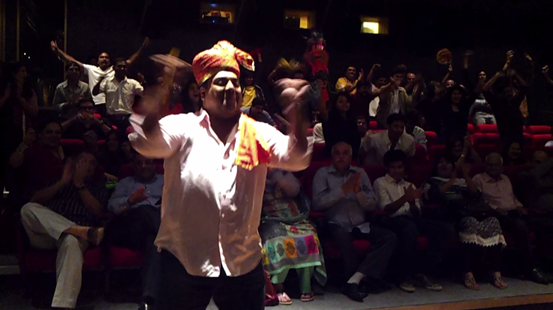 I was just as surprised as I’m sure you are to hear that of all people in the world of Bollywood, Ram Kapoor decided to do the Harlem Shake!  When the cast and crew of Mere Dad Ki Maruti walked into the screening of their film, little did they know what was in store for them. They came, sat in their seats, and then, suddenly, Ram Kapoor entered wearing a turban and broke into the Harlem Shake!

The Harlem Shake is a recent phenomenon on the internet that took over the web like Psy’s Gangnam Style. This meme was established by teenagers from Queensland, Australia. As more people replicated the original video and uploaded their own versions to YouTube, Harlem Shake became an Internet rage. By February 15, about 40,000 Harlem Shake videos had been uploaded, totaling 175 million views.

Therefore, you can imagine why it took audiences by surprise!  The entire audience was shocked to see that it had been planned well in advance, with people from the seats jumping up and doing their own crazy moves. Fans were delighted and enthusiastically cheered and took videos of the fun-filled performance!

“Mere Dad Ki Maruti” is an outrageous comedy set against the backdrop of a loud Punjabi wedding in Chandigarh.  It tells the story of a boy who sneaks his dad’s fancy new car out to impress the college hottie and how all hell breaks loose when he loses it!

We’ll keep you posted on the release, so stay tuned to UrbanAsian.com!