“3G”, starring Neil Nitin Mukesh and Sonal Chauhan, is the next big release from Eros Entertainment.  The music was released on February 26th, 2013 on Eros Music at Shock Club Bandra with live performances from Mithoon, Sonal Chauhan, Abhishek Naliwal, Tochi Raina, Gajendra Verma, Shilpa Rao and Mithoon’s band.  The movie itself officially comes out this Friday in theaters everywhere!

The soundtrack of “3G” is composed by Mithoon, who shot to fame with his track “Maula Mera” from Anwar in 2007.  He also composed tracks for “The Train”, “Murder 2”, and “Jism 2.”  Considering Mithoon produced such strong tracks in the past, my expectations were high for this album.  However, the album doesn’t hit as hard as it could have, especially since the film is a suspense thriller.  Except for the track “Bulbulliya”, the album is a bit monotonous in sound.  No real “oh wow” moments.  That is, there are no songs that really stand out and stick in your head.  The female singers in the album completely steal the show, but they are not utilized to their fullest in their tracks.  Overall, “3G” is a nice album, but with Mithoon at the helm, one expects even more! 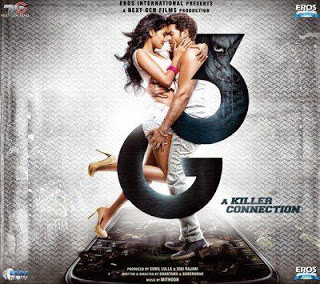 The track is pretty good.  I personally think the acoustic guitar should have been accented more on the track to give it a smoother vibe.  KK does okay, but it’s not his best song.  Sonal Chauhan, on the other hand, makes a nice debut.  There is a unique quality to her vocals that is perfect for playback. Obviously, we hope that Sonal will get many more acting roles and can sing more often for herself.  However, I think her voice could be utilized well on someone like Deepika Padukone too as it has a fresh feel to it.

Shilpa Rao is probably best known for her sultry voice.  Earlier she’s impressed us in songs like “Who Ajnabi” (The Train), “Anjaana Anjaani” (Anjaana Anjaani), “Jazba” (Ladies v/s Ricky Bahl), “Yaariyan” (Cocktail), and “Ishq Shava” (Jab Tak Hai Jaan), among many others. This track is good, but the composer did not utilize her as much as she could have been used, since it is a male dominated track.  It’s a nice track, with nice piano playback and instrumentals.  However, I was expecting a whole lot more in terms of vocals, considering the singers are all great – Shilpa Rao, Arijit Singh, and Toshi Raina.

Adnan, as usual, does justice to the song with his vocals, but I think the rustic charm of Sukhvinder Singh’s voice or the sufi feel of Wajid’s may have kicked the track up another notch.  What pleasantly surprised me, however, was the fact that this song had a better background track than the first two songs.  Here the music enhances the vocals and overall feel of the track.  This is the type of song I was hoping for when I heard Mithoon was the composer.

I definitely preferred this version of “Kaise Bataaoon” to the original.  The minimal instrumentals and Abhishek Nailwal’s vocals do really well.  Surprisingly, the chorus makes this track sound bubblier than the original version.  Using violin plucking, instead of a chorus, may have helped with the bubbly sound they were looking for.  However, it is a nice track and Abhishek does a commendable job with his singing.

Toshi’s done a great job singing on this track.  I’m glad they opted to have it sung in the lower octave.  However, compared to the original version, this one fell a bit short.  It’s just too typical in terms of sound and composition.  If this had also been a duet featuring Shilpa, or maybe even a complete female version, it may have been able to outshine the original.  However, since the earlier version was also male dominated, this song doesn’t add anything new.

The theme, of course, is an instrumental.  It’s only 2 minutes in length and does what it needs to as a theme, but does not stand out on the album.  It could have been more multidimensional as a composition.

Overall: Worth a listen, but don’t expect to here a “Maula Mere” type song on the album