Overall, the soundtrack to the “Attacks of 26/11” is okay, but nothing exceptional.  The album features many new comers as singers, lyricists, and composers, and a few veteran singers like Sukhvinder Singh.  It’s a nice attempt, but for some reason does not quite hit the ball out of the park.  I’m sure the tracks do justice to the movie to supplement scenes, but as an album, are just alright.  The lyrics for all the song are good and try to paint the picture of good vs. evil.  The best track on the album is “Hame Ranjo Gum Se.”  Music released on the highly respected Eros Music label. 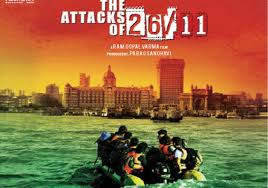 The album starts with a very intense musical number.  I thought it was an interesting number especially.  The power and intensity of the song is felt instantly with the incorporation of the Indian classical “Shiva Tandava Stotram” piece.  After a few verses from this piece, it blends into the lyrics that Kalgi Thakar has penned.  It was a good piece and sets the pace and mood for the rest of the album.  However, in parts it sounded like “Deva Shree Ganesha” from Agneepath.   Is it a track that people will blast in their cars?  Probably not, but it reflects the theme of the movie perfectly and provides the right amount of melodrama to supplement the dark subject matter of the movie.

This track is a rock number, which sort of reminded me of the “Ishaqzaade” title track.  It’s alright but nothing new, and it falls short of impressing.  It sounds a quite messy as a composition.  I understand they were trying to go for a grunge sound, but when it suddenly speeds up it just sounds chaotic.  Not the best on the album.

While the first two tracks were high intensity numbers, Track 3 goes the other way to provide a more subtle beat.  It is obvious this one is a background track to accompany the film.  The song reflects about what makes one turn into a terrorist and tries to explore their psyche.  You can feel and here the military vibe on the track.  Chaitra Ambadipudi does a decent job singing, but I feel like someone like Sonu Nigam may have been able to breathe more life into the track and illicit a stronger emotional response from the listener.

When I heard this track, I felt like this is probably one that will play when the ending credits roll.  It’s probably one of the darker renditions of “Raghupati Raghav” I’ve heard.  Usually, the bhajan is sung more upbeat and doesn’t have as melancholy a feel as this song had.  The instrumental interlude a couple minutes into the track was interesting.

Following Track 4 is another rendition of Raghupati Raghav, which was also pretty dark like the first version.  However, this piece was more stimulating as a composition.  It was also a more controlled rendition by Sukhvinder Singh.  The rustic feel of his voice that we are used to here was utilized perfectly in this song.  I wish that this one had been 5 minutes and the last track the shorter version, rather than the other way round.

Madhushree’s voice sounds especially beautiful in the opening.  The song has dialogue by Nana Patekar infused throughout the track, but mostly the track is focused on Madhushree’s singing.  Although the track has minimal instrumentals – ie mostly tabla – it surprisingly, creates one of the most memorable pieces from the album.  Nana’s dialogue almost has a “Kabhi Kabhi” Amitabh feel to it.  Nice composition by Amar Mohile. The track is the longest on the album clocking in at 9 min 16 seconds.