From “Salaam Bombay” to “Monsoon Wedding” to “Vanity Fair” and most recently, “The Namesake”, Mira Nair has established herself as one of the most popular desi directors in the west, with a strong record for making high quality films.  Her next venture, the much-awaited global thriller, “The Reluctant Fundamentalist,” is sure to join the ranks of these other amazing Nair movies.

The film, based on the novel by Mohsin Hamid stars Riz Ahmed, Kate Hudson, Kiefer Sutherland, Liev Schreiber, Om Puri, and Shabana Azmi.  “The Reluctant Fundamentalist” was the opening night selection at the prestigious Venice Film Festival and will now hit theaters nationwide this spring, releases in theaters on April 26th!  The brand new trailer and poster have premiered for this eagerly anticipated motion picture event, and we have your first look below.

We begin in 2011 in Lahore. At an outdoor café a Pakistani man named Changez (Riz Ahmed) tells Bobby (Liev Schreiber), an American journalist, about his experiences in the United States. 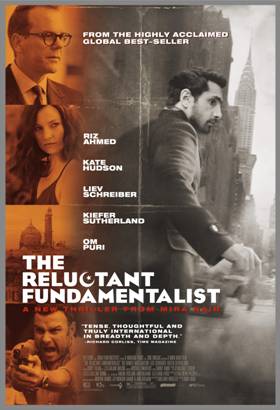 Roll back ten years, and we find a younger Changez fresh from Princeton, seeking fortune and glory on Wall Street. The American Dream seems well within his grasp, complete with a smart and gorgeous artist girlfriend, Erica (Kate Hudson).

But when the Twin Towers are attacked, a cultural divide slowly begins to crack open between Changez and Erica.

Changez’s dream soon begins to slip into nightmare: profiled, wrongfully arrested, strip-searched and interrogated, he is transformed from a well-educated, upwardly mobile businessman to a scapegoat and perceived enemy.

With time, he begins to hear the call of his own homeland. Taking us through the culturally rich and beguiling worlds of New York, Lahore and Istanbul, “The Reluctant Fundamentalist” is a story about conflicting ideologies where perception and suspicion have the power to determine life or death.