Chelsea’s Asian Star project is back for its fifth year and will return bigger and better on Monday, May 6th, 2013 at Chelsea’s world-famous Cobham training ground.

The Asian Star initiative is the first scheme of its kind ever undertaken by a professional football club and is designed to give a much-needed boost to Asian participation at all levels of the game.

Last year’s event saw almost 400 young players competing to win a season-long placement on the Football Development Centre and Asian Star 2013 promises to be the best one yet. 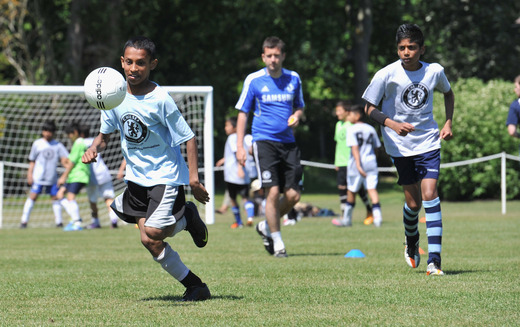 Already five former winners have gone to play in professional club academies, including Sam Khan who has since signed for Birmingham City. Another winner, Kai Bhuller, went on to play for Premier League side Norwich within their academy programme and has now made an impact at a number of clubs from his new home in the United Arab Emirates.

‘It’s a great initiative. It provides an opportunity for children to experience the workings, facilities and coaching at a professional football club. For Kai, it provided a platform and installed and self-belief that remains with him today. I have no doubt Kai will hit the heights in football.’

We are also delighted to announce we have joined forces with Sporting Equals for the 2013 campaign and look forward to offering more players from Asian communities the chance to train and compete at Cobham in Surrey.

‘Sporting Equals are delighted to be working with Chelsea FC and supporting Asian Star 2013. Chelsea has shown their commitment to finding players from South Asian backgrounds, opening up their youth programmes to the whole community when www.chelseafc.com/asianstar/asianstar for new talent. We will be working to empower the local community including clubs, coaches, players and their families, enabling them to utilise the full support available from Chelsea FC and Sporting Equals. We www.chelseafc.com/asianstar also help develop new relationships for the club and its community and support Chelsea to be inclusive promoting sport for all.’

The Asian Star program is for boys in the under-9 to under-12 age groups. The initiative is open to all players from all Asian backgrounds with a priority given to boys with South-Asian heritages.

Players will be judged on a series of matches and tests specifically designed and used by the Chelsea Academy to examine speed, skill and ability. Chelsea will also be hosting a series of workshops to inspire and inform parents as well as aspiring coaches.

Along with Sporting Equals we will also be holding a special Asian Star training day in the build-up to the May event to put young players through their paces. Keep an eye on the Chelsea FC website for details.

To register for this year’s event please visit http://www.chelseafc.com/asian-star