The ‘Bajrangi Bhaijaan’ duo – Salman Khan and Kabir Khan – sure know how to celebrate Eid in style! Since it’s Salman Khan we are talking about, the route has to be thoda hatke! The social media URLs of the much awaited film of the year, ‘Tubelight’ were unveiled in the most innovative way possible, that is through a video that flickers like a ‘Tubelight’! Sung by young kids, Jaljaa Jaljaa.. is constantly seen ringing in the background.

Salman Khan’s affinity for kids is a known fact. As a part of their promotional strategy, Salman and director Kabir Khan enlisted the help of young kids. Handpicked from the actor’s residence Galaxy Apartments, the children were brought together to sing the chorus for this video. 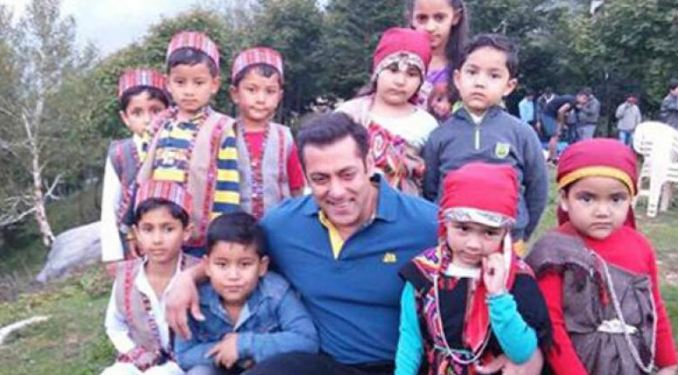 Commenting on this strategy, Kabir said, “Salman and I decided to use a chorus by kids for the teasers but we didn’t want to get trained kids to do it. So he suggested we round up a bunch of kids from his building and do it in a fun way. He and I then spoke to the kids ranging from six to 11 years and took them to the studio where Salman explained to them what we are doing. We are using this chorus in the teaser-logo as well as the teaser promo”.

He further added, “Salman really enjoys working with kids and has a special equation with them that he doesn’t often share with grown-ups. Even when we are shooting among thousands of spectators, he will always point to a kid, call him and spend time with him. That’s also one of the reasons ‘Bajrangi Bhaijaan’ which revolved around Munni played by Harshali (Malhotra) happened; I knew he would have a special connect with the child”.

Not only have the makers peaked at our curiosity but have left us with so many unanswered questions!

Guess Fans will have to wait a tad bit more to know how the maverick Salman Khan celebrates Tubelight ki Eid!