In September 2016, world leaders, including Indian Prime Minister Narendra Modi, will mark the first anniversary of the adoption of the United Nations Sustainable Development Goals. These Global Goals are a global plan to end poverty, reduce inequalities and combat the threat of climate change by 2030. 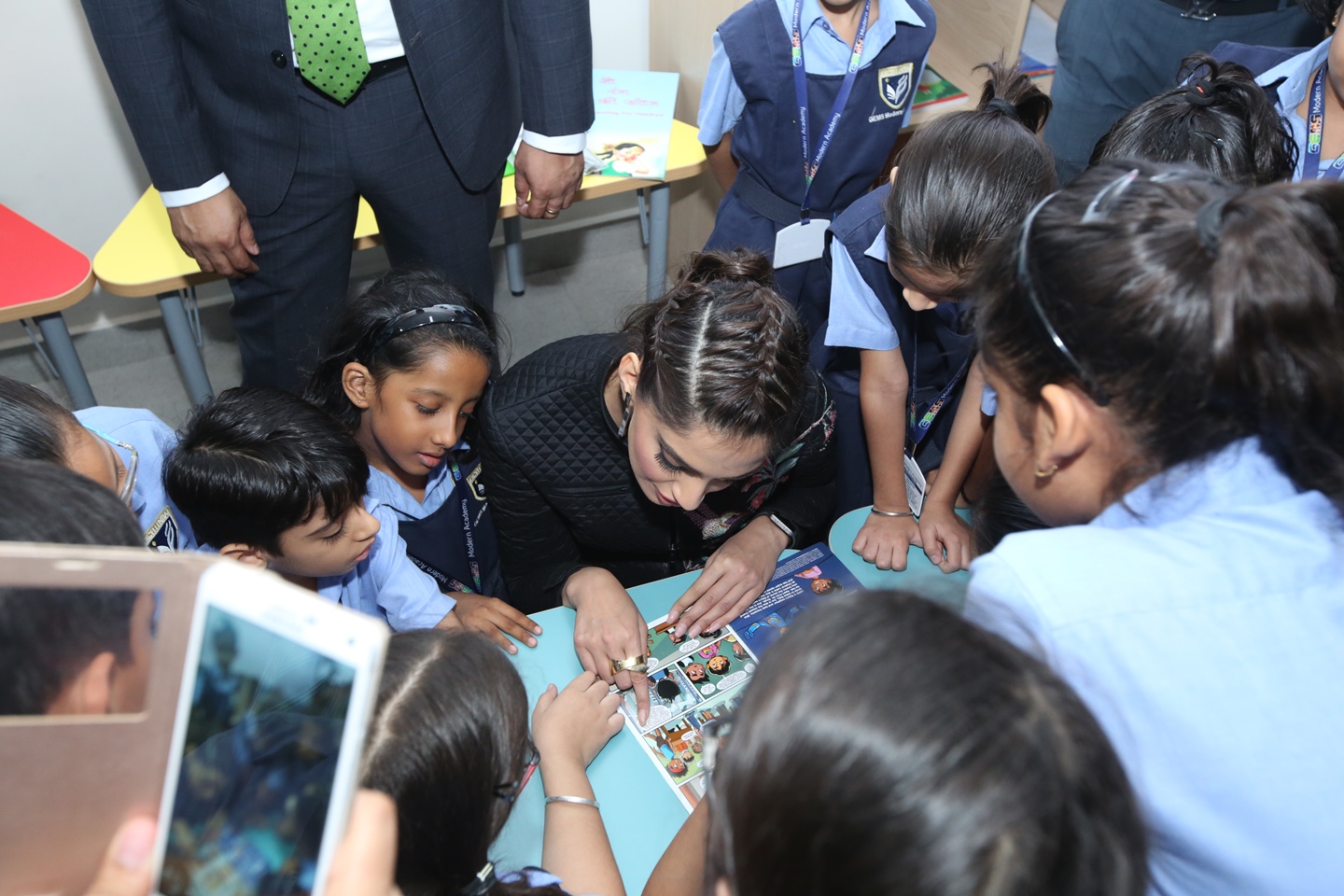 On the occasion of National Teachers Day, 250 eminent educationalists, UN Global Goals champions, members of civil society, UN bodies, corporates, youth groups, students, teachers and one of the esteemed ambassadors of the World’s Largest Lesson, Indian Actor and youth icon Sonam Kapoor, gathered at GEMS Academy, Gurgaon, to launch The World’s Largest Lesson India, the India chapter of the program, which aims to teach every child in India – nearly 360 million – a lesson about the Global Goals.

Powered by India partner GEMS Education, the world’s largest K-12 private education provider, and implemented in partnership with UNICEF, The World’s Largest Lesson India will encourage schools to teach at least one lesson on the Global Goals, to make sure children understand and are empowered by the commitments their country has made to ending poverty, inequality and climate change by 2030. Schools are then encouraged to support students to take action to help achieve the goals. 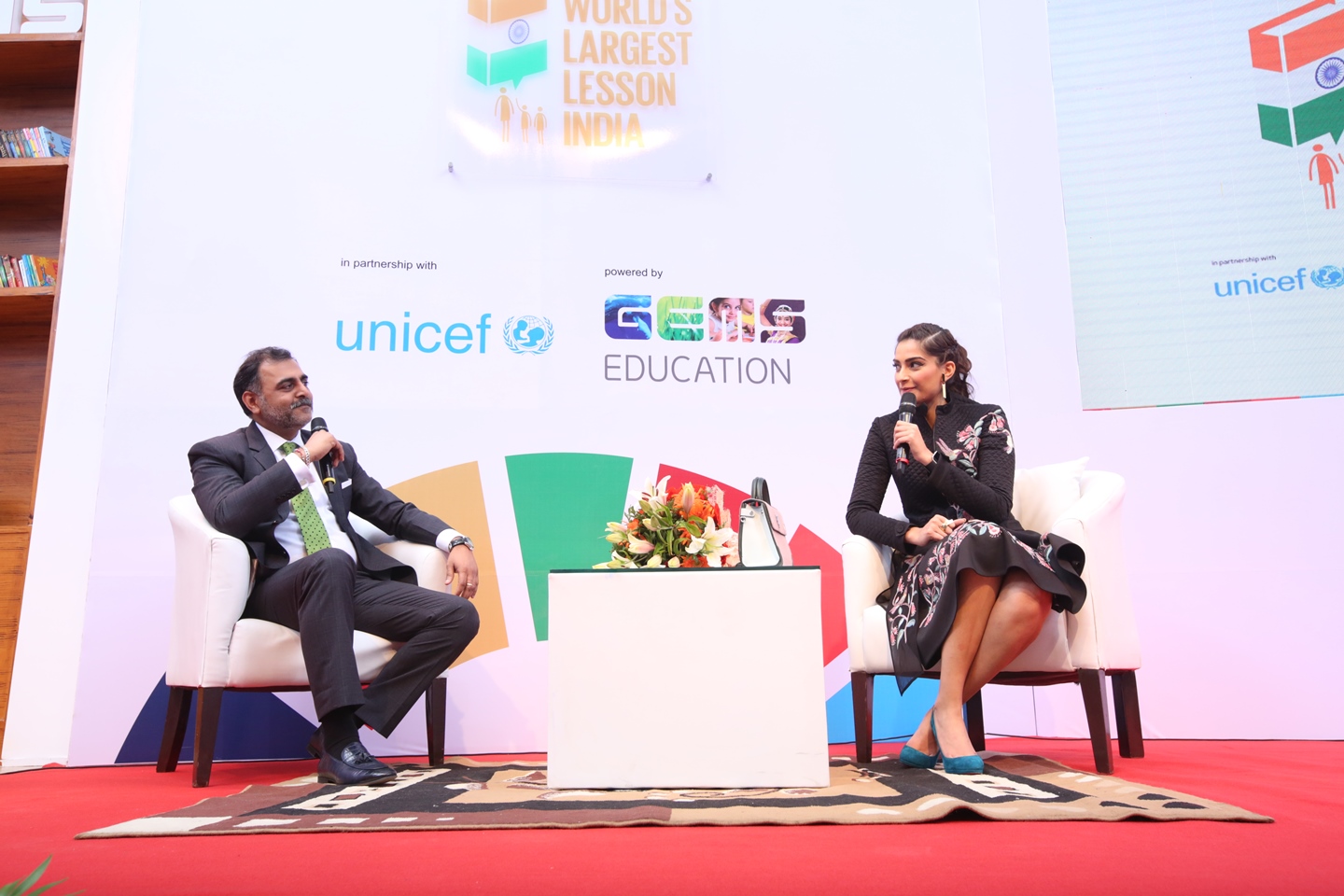 India is a global leader economically and in technology, and has every potential to become a front-runner in ending poverty. The country is at the crossroads of transformation and several strides have been made to address national and global issues, but more can and needs to be done. With over a quarter of the world’s population being under the age of 14 years old and with India having the largest youth population in the world, children and young people will be most affected by the implementation of the goals. The World’s Largest Lesson India initiative aims to engage children and young people in the ambitions of the goals and encourage their participation in this process of change.

The World’s Largest Lesson is an initiative by Project Everyone, an organization conceived by Writer, Director, Comic Relief Co­founder & UN SDG Advocate Richard Curtis to make the Global Goals famous, so that they stand the greatest chance of being achieved. Speaking about the launch of World’s Largest Lesson India, he said,

“We are delighted to launch the World’s Largest Lesson India and are grateful to our founding partner GEMS Education for making this happen. We are overwhelmed with the incredible support of partners such as Reliance Group, tGELF, the very talented Sonam Kapoor and countless others for helping us to engage children in the Global Goals. Children and young people are right at the heart of the Global Goals agenda. The World’s Largest Lesson is based on the idea that if children right across the world grow up knowing about the goals and feeling positive that this is practical plan with a deadline that they can fight for, then I truly believe that this will help them become the first generation to end extreme poverty, the most determined generation to fight inequality and injustice and the last generation to be threatened by climate change. The World’s Largest Lesson is just the first step in this but it’s a very important one and we’re delighted that India’s children can take part. “

GEMS Education is the founding strategic partner for The World’s Largest Lesson India campaign and powers all activities in India. Speaking about their association, Mr Amreesh Chandra, Group President of GEMS Education said:

“With India accounting to nearly 17% of the world’s population, we have a strategic and resourceful advantage to reshape the world’s priorities, provided we are equipped to understand and execute them effectively. Through the World’s Largest Lesson initiative in India, we are leveraging the GEMS network – 175 schools, over 70,000 children and over 6,000 teachers in India – to spread knowledge of the global goals, pivotal to pursuing national and world development. With 17 global goals for sustainable development to be achieved in the next 15 years, GEMS Education sees this as a priority to teach the next generation of world leaders. As a value driven institution, GEMS Education has already been encouraging students across its international campuses to embrace responsibility for over the last 55 years; and today we are looking beyond us, and reaching out to the country as a whole to help propagate the world’s priorities – the UN global goals”. 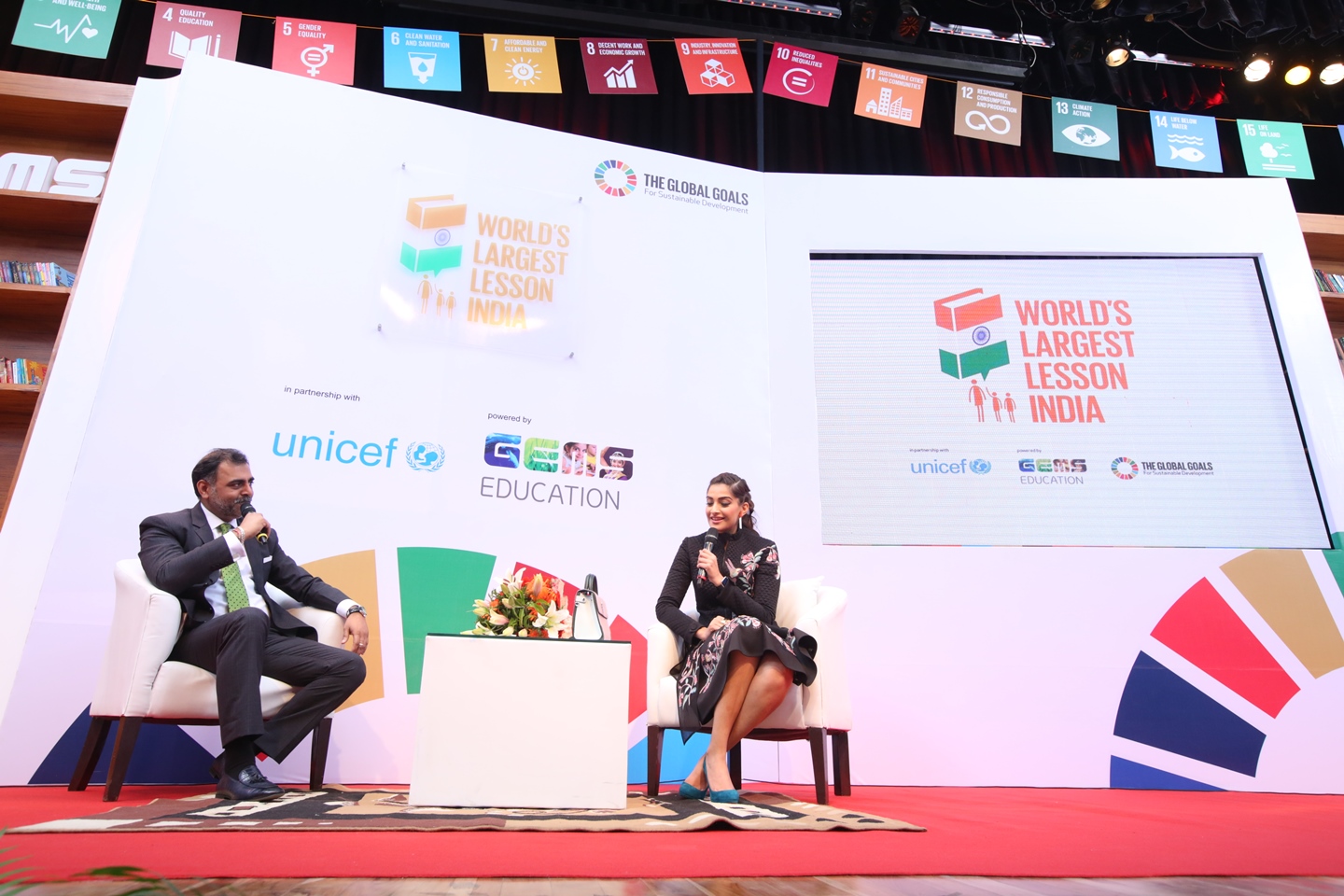 “The World’s Largest Lesson will do more than teach children about the global goals. It will engage them in the effort to achieve those goals – educating them about the challenges that are shaping their futures and encouraging them to drive change in their own communities. Young people can help achieve the global goals by holding their leaders accountable for the promises they are making – and by holding themselves accountable for building a better future for everyone.”

During the event a number of individuals, corporates and organizations confirmed to take action to support the World’s Largest Lesson India initiative by spreading awareness of the lesson plans through their distribution channels, networks, media reach, the children and teachers they support, and employees.

Leading the support is Reliance Group, one of India’s largest business conglomerates who were also the first corporate partner for the 2015 India campaign. This year, the group shall promote The World Largest Lesson India initiative through its various customer-facing platforms. Other notable pledges came from NGOs; Akshaya Patra, the world’s largest free midday meal program reaching over 1.4 million children in India, Save the Children; and youth and education empowerment organizations such as The Global Education & Leadership Foundation (tGELF).

The comic books will be translated into English and five regional Indian languages – Hindi, Bengali, Marathi, Telegu and Tamil – and will be available to download and view for free from 15th October 2016 from The World’s Largest Lesson India website. The involvement of high-profile personalities who will co-edit some of the comic books, will add further appeal for the lesson programme amongst children.

The leading comic book includes activities for children to help their understanding of core issues and to encourage student action. One specific action being encouraged is with World’s Largest Lesson India partner Design for Change, an organization that encourages students to create their own change projects In schools. In partnership with GEMS Education, the Design for Change “I Can” schools challenge will offer a prize to a school that has created a sustainable change project in their community and can link this to the ambition of a specific Global Goal.

“The children of today are the leaders of tomorrow. Values and lessons taught early in the childhood can lead to a better understanding and emphasis for a child on his/her future. This is exactly what the World’s Largest Lesson India sets out to do – to engage children in the effort to achieve the UN’s Global Goals by educating them of the challenges impacting their futures and encouraging them to drive change in their own communities. In my capacity as an ambassador, I seek to add further momentum to reach the children of India for this noble cause.”

Today, The Worlds Largest Lesson India is calling on every person and every organisation to help deliver The World’s Largest Lesson India initiative, in schools across the country. It is calling people to start delivering these lessons from 19th September, the start of the global week to celebrate the one-year anniversary of the adoption of the United Nations Sustainable Development Goals. Let’s work together to make sure every child learns about the commitments their government has made to end poverty by 2030.

If you are interested in partnering with The World’s Largest Lesson India, please email wllindia@sterlingmedia.co.uk