There is nothing happier for an actor than to be appreciated for his/her work.  So, you can imagine how excited Alexandra Hellquist was when director Rohit Gupta broke the news to her that she won a Gold Best Supporting Actress award!  Alexandra won the coveted award at the International Independent Film Awards (IIFA) event in California this week for her work in the unique comedy feature film ‘Midnight Delight’.  The International Independent Film Awards (IIFA) is dedicated to showcasing and celebrating talented independent filmmakers and artist from around the world who share their visions in a powerful, creative and entertaining way. 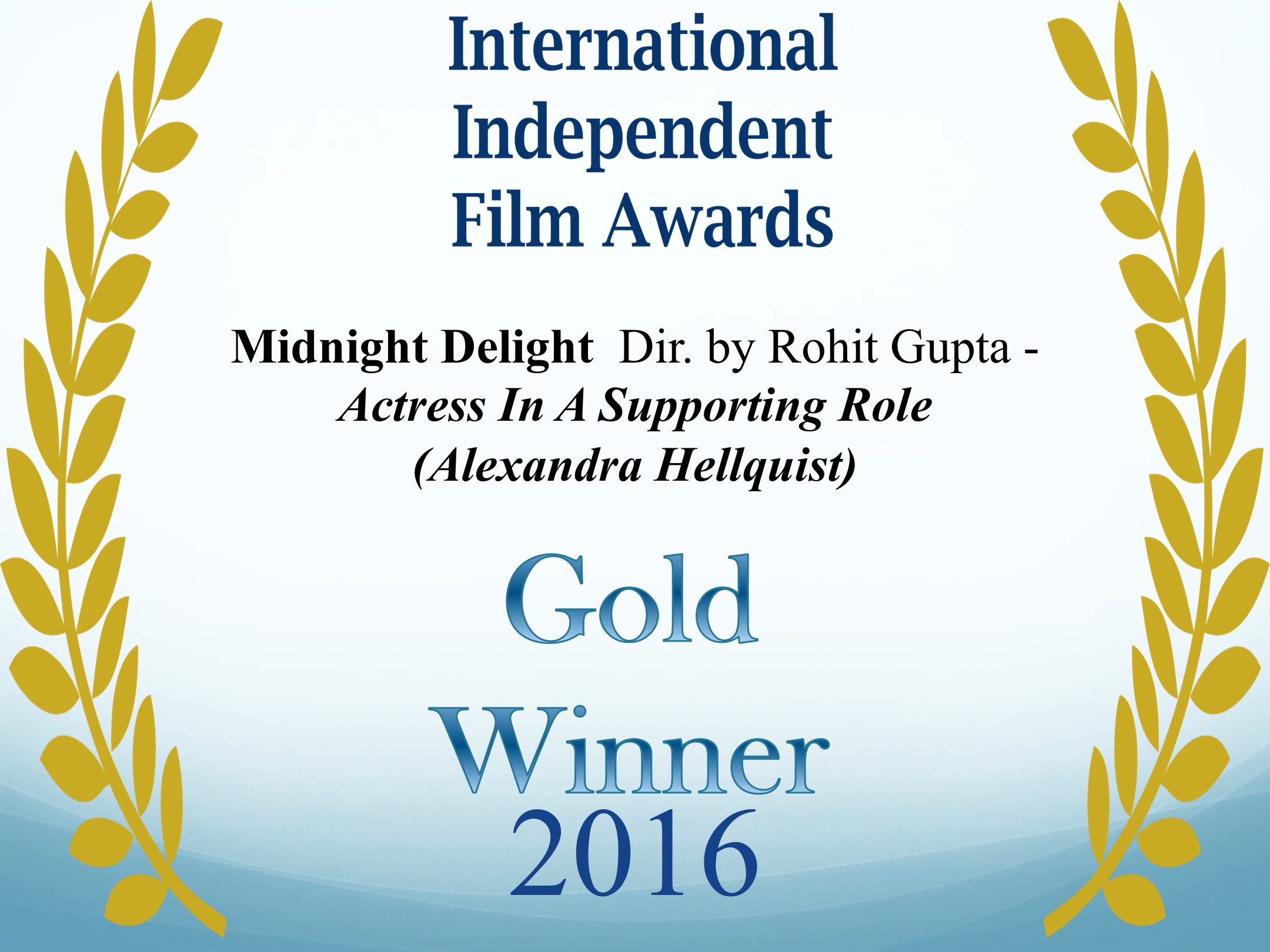 Midnight Delight has been doing well in the film festival circuit.  It premiered earlier this year at the ‘Cannabis Film Festival‘ winning the ‘Judges’ Choice Film of the festival’ award in addition to all the accolades and applause that it has been garnering at festivals around the world.  Besides Alexandra’s win, Midnight Delight also bagged awards for the Best Experimental film, Best Concept, Best Director and Best Ensemble Casting at the event.  Moreover, the film was released on July 21, 2016 worldwide via video on demand (VOD) on various platforms including iTunes, Google Play, Amazon, Vimeo, Hoopla, Sony among others to extremely favorable response with 87% audience score currently on rotten tomatoes, the famous film review aggregator site.  So, anyone can see the film to join in the high the cast and crew must feeling after these wins!

Alexandra plays Jolene in the vignette ‘Illusion or Reality‘ – a quirky, naive, aspiring actress exceedingly ill-at-ease in the smoking lounge, who’s very much a newcomer to the experience of cannabis. Like the other segments in the anthology feature, this piece was entirely improvised, with all the dialogue developing spontaneously between Hellquist and her co-actor, Michael LaGuerre (Award of Merit, Best Lead Actor, Accolade Global Film Awards 2016).

While Alexandra still couldn’t believe her win, director Gupta knew from the start that Alexandra could bag an international award.  It is always extra special when a director has such faith in his actor’s work!  Upon hearing that she had won, Gupta, agreed that it was – “Well deserved!”

Alexandra couldn’t hold back her excitement.  She gushed,

“It’s my very first individual award from a festival, and I’m thrilled! I’m so grateful to the International Independent Film Awards for their warm recognition of our film – but most of all I’m grateful to Rohit, for believing in me from the beginning. He made it all possible, with his off-kilter vision and his absolute trust in all of us. It’s really a one-of-a-kind piece, and I’m so honored to have been part of it!”

Alexandra is an international actor, who meandered her way through seven different countries over four continents before arriving in the United States to pursue her passion for acting. Perhaps because of her international background and nomadic childhood, Alexandra’s work is marked by a insistence on a chameleonic range of roles, which can be seen in her off-beat character work for Midnight Delight.

“I’m always excited by the opportunity to try on a skin that’s a little bit strange, a little bit unexpected. One thing I love about this work is that it’s a chance to live many lives in one, to see the world through many different eyes, to walk – or skip, or limp, or dance! – in many different shoes. So, when Rohit basically gave us carte blanche to create a character and play, I leaped at the opportunity. And I hope it’s as fun for the audience to watch as it was for all of us to make.”

This year will see the VOD release of three of Alexandra’s other feature films – Insurgent Pictures’ “Sole Proprietor”, which just finished its theatrical run in LA, Philadelphia Philms’ “Digital Physics”, and World Soul Entertainment’s “The Long Short”. You can also see her in Media Blaster’s “Shinobi Girl”, as well as a multitude of shorts. Look for her projects on iTunes, Amazon, Google Play and Vudu, and follow her on Facebook as well as her website, alexandrahellquist.com.

Produced by Gupta and Saumin Mehta under the production company Dot and Feather Entertainment the film features nine vignettes of comedy, wit and reality that follow strangers in high spirits, crossing paths during nights of exploration. These curious visitors reflect on daily existence, societal curiosities and demystify the status quo along the way conversing about various topics. Discussion includes topics varying from “why do we talk” to “what do models eat”, “if water makes us fat”, to “if dolphins could be the reason for the inception of the entire universe or its destruction” moving to even hats, moisturizer, maths, infinity, working out at the gym, dating games and health supplements among other topics.

We are sure many more wins are in store for Midnight Delight!