Someone once said that music is the strongest form of magic, and indeed how magical it is to hear the melodious voices of New York City’s own Navatman Music Collective (NMC). NMC is a one-of-a-kind choir that aims to bring out the depth and beauty of Carnatic (South Indian classical) music while imbuing it with a soul and energy that borrows from the members’ contemporary and diverse influences. We had the opportunity to speak with artistic director Roopa Mahadevan about their upcoming album, norms and expectations of Carnatic musicians, and Indian-American identity.

Talk a bit about your upcoming album.

This is our debut album. It’s called An Untimely Joy. It showcases some of our favorite pieces from our repertoire. Some are centuries old, like Govindashtakam, which is how our album opens; it’s a slokam on Krishna. Some are brand new, for example, Gavathi is something that Anjna Swaminathan and Rajna Swaminathan composed for instruments that we have adapted to vocal. It has a variety of both traditional Carnatic as well as exploratory things. We’ve also incorporated some non-traditional instrumentation so one of the tracks has cello and a folk jazz vibe in it. And one of the pieces also has harmony. So it tries to represent some of the variety that we bring to the music ourselves.

Are all of the songs from your album originals that you composed? You mentioned that Gavathi was by Anjna and Rajna but did you compose most of the other ones yourselves?

So I’ll just go through each song. Govindashtakam is Adi Shankara’s. Gavathi was originally composed by Anjna and Rajna. Suttum Vizhi is a Bharathiyar poem that was made famous by Kandukondain Kandukondain, Hariharan’s rendition, which was tuned by A.R. Rahman. We used a TM Krishna rendition that we built upon so we created our own structure, added a couple of ragams to that. So I guess you could call that an adaptation of an original existing composition, and in that we also do the film version because a lot of people in our group are really proficient in Bollywood, Kollywood, so on, so we wanted to feature that. We also have an Oriya bhajan that we actually learned from the lead singer of Nrityagram, the Odissi troup. So that one’s not original. And then we conclude with a Tillana by Balamurali Krishna with some elements of our own. So actually I would say with the exception of Govindashtakam, we’ve woven twists into all the tracks of our album.

Have you all ever sat down and composed a piece on your own or do you only take existing slokas or songs and do adaptations on them?

That’s something we’ve been wanting to do more of but we have done some. One of our members Vignesh wrote lyrics and had an idea of doing a song in praise of Saraswati. I did most of the tuning for that and we came up with our own format, which is pallavi, a verse, and a chitta swaram. That’s been something we want to build on so we did another composition in Kamboji, with the same pattern of pallavi, verse, and chitta swaram. Vignesh is working on a couple others so we hope to release those soon. We’re having a lot of fun balancing and building on skills and repertoires in the Carnatic tradition because there are certain songs that when you put them to a group, it changes everything and gives life to it. We’re also trying to do more themes in Carnatic music that you usually don’t hear.

When composing an original song, do you start with the lyrics or format and then pick a ragam and do all the embellishing after that? How does that process work?

For Saraswati, we had a line and started tuning it in many different places. And then once we got a catchy tune that stuck, we started improvising on the lyrics. So it was both lyrics and the tune at the same time but we had one base line. For the other ones that I’m working on, it’s mostly inspirations from a raga or a catchy tune, and then we start claiming syllables, lyrics or patterns within the ragam. In terms of the tune, it’s usually just what sounds good, in keeping with the aesthetic of Saraswati the ragam and the meaning of the particular line. But it’s very iterative so we’ll be talking aloud about what sounds good, what doesn’t sound good, etc.

Many Indian-American children and youth of today’s generation shy away from listening to or singing Indian classical music. How would you say your work appeals to them?

There are a lot of airs about Carnatic music and a lot of assumptions about the kind of person who would do Carnatic music. There are some stereotypes that they are very austere, quiet and good-natured and don’t take risks. But I would say Carnatic music is so much tied to the culture in which it is currently flourishing, which tends to be Tam-Brahm, upper-middle class, somewhat educated group of people. Part of what goes with that is a sense of morality, the way you should act, and the kind of aspirations you should have for yourself. Very heteronormative, very gendered. If you’re a woman you should sing a certain way; if you’re a man you should sing a certain way. How you carry yourself, the kinds of clothes you wear. These are things that are not always scripted. You never hear someone say this is what Carnatic music is; there is never an explicit conversation about that.

So at some level, what we are trying to debunk is the idea of the ideal Carnatic musician. We all have very different backgrounds. Our personalities are quite varied. But we have fun when we perform because for me that’s one of the main takeaways I want people to get from this.

You can be yourself during Carnatic music. You can have a good time. This is an activity you can do with friends. It doesn’t have to be locked up in a room in fear of your guru or in fear of parents or the stage. This can be an activity that builds community, which can be pretty rare. I would love if kids could come to our concert and say, “Wow, it really looks like they’re having a good time!” or “Wow, they created their own composition? That’s cool, I’d like to do that.” 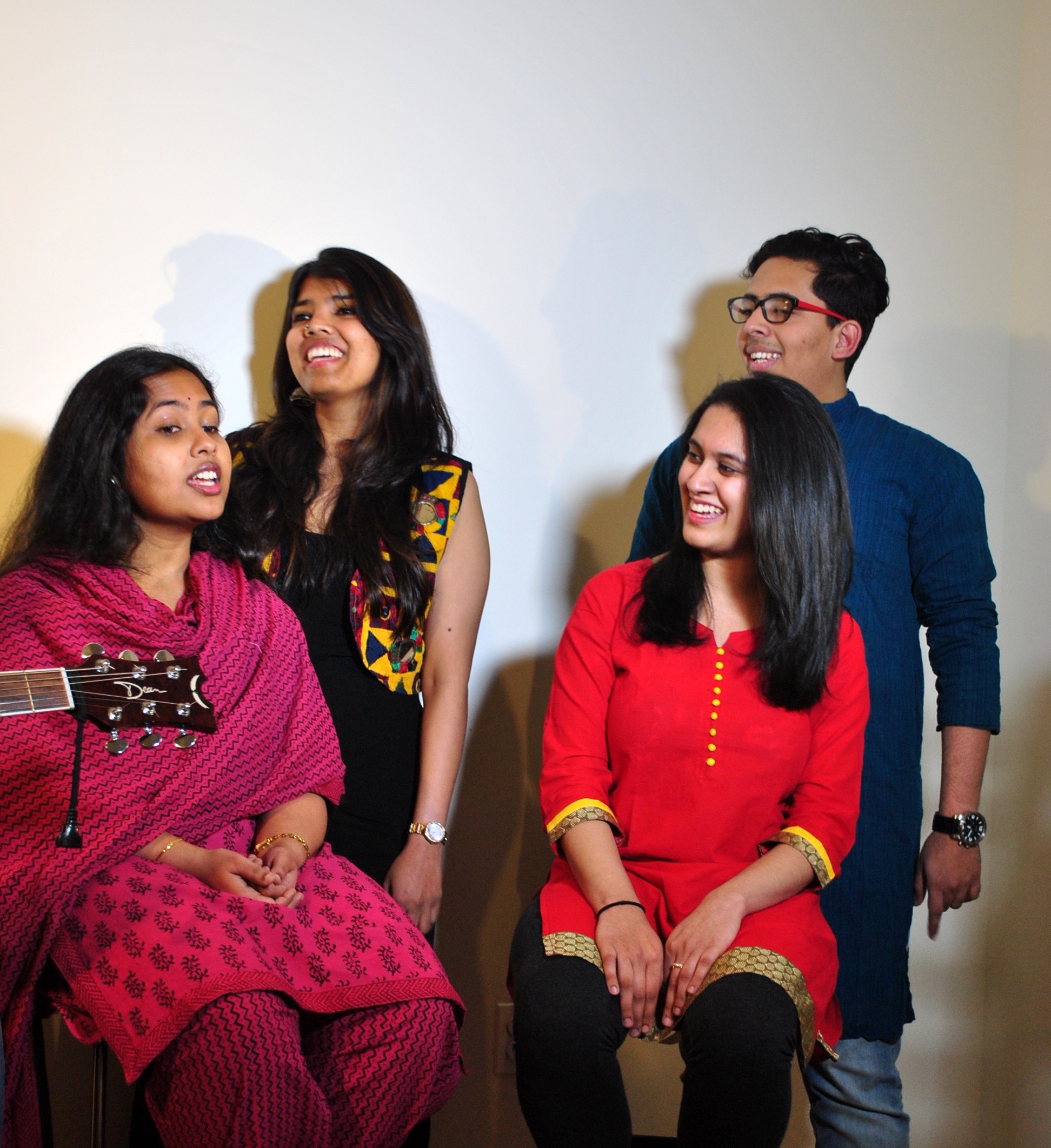 Navatman is an organization with both music and dance. Has NMC collaborated with Navatman Dance Company at all? If so, what was that experience like?

Yes we did last month. It was a student showcase of Navatman so we collaborated with the dance where there was a lot of acting, dancing and singing altogether, and that was the start of a very big project we are working on. In future, we see a dance company and a music collective collaboration happening. This is one of the tours we are working on in fall for DC and Virginia so we plan to take the music collective and dance company together to do a whole show with both of us onstage. In that experience, we were actually acting and singing at the same time, which was hard but everyone rose to the occasion so I think there was a real opportunity for us to test the waters of what it means to be a classical musician, how can you express yourself through theatre, through dialogue. So that’s definitely an area we want to work on and we have plans to do something like that in the fall, even a bigger production that involves more theatre next spring. We figured out that there is one hidden strength in the team and that theatre is something we should explore more in the future.

Where do you see NMC in the next five years?

What I try to do is mould the group to the strength of its current members. So I wouldn’t say that I have a strict, set in place vision. There are some guiding principles that are really important. People should enjoy what they’re doing. There should be a sense of friendship and community. This is also a chance for members to build their own individual skills. People are coming at it from a lot of different perspectives. For some people, they have a stressful job and this is where they get two hours of release, singing to de-stress. For others, they got to a high level in India but never really kept up with it. So this is a good way for them to keep up with the music. For me, I guess the vision would be that it is constantly in alignment with the goals of the members. I would also like to see our group go far. I want more of the Carnatic audience to hear our music and see that there are possibilities to pursue it in this kind of way. I also want this to be a way for people who are not exposed to Carnatic music to gain access to the tradition. Some of the compositions we are doing are really complex and beautiful. With the power of group voice, that beauty comes out even more. The focus then becomes the music rather than the virtuosity of a single person, which can also be a block. I hope that our music can make people feel like they are part of something.

Here’s wishing NMC all the luck with their upcoming album An Untimely Joy! Stay tuned for the album’s official release this August!