It happens very rarely in Bollywood that the children of celeb parents, who played onscreen lovers, get the chance to be get together onscreen. After Rati Agnihotri and Kamal Haasan played onscreen lovers in the film Ek Duje Ke Liye (1981), the next generation, Tanuj Virwani and Akshara Haasan, will be seen together in an upcoming short film.

Kamal Haasan’s youngest daughter, Akshara Haasan, debuted with Shamitabh alongside Amitabh Bachchan and Dhanush. Rati Agnihotri’s son, Tanuj Virwani, was currently in the news for his hottest movie of the year One Night Stand with Sunny Leone. Akshara and Tanuj will be seen together in the intense romantic drama “Scent Of A Woman”. 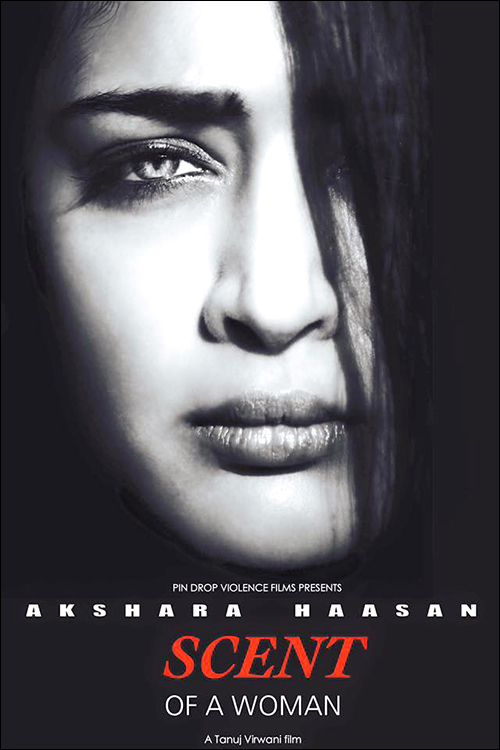 The poster of the short film shows Akshara looking menacing with her mysterious eyes are apparently seeking some kind of revenge. “Scent Of A Woman” is a story of Akira, played by Akshara Haasan, who finds herself caught between an unfaithful boyfriend and an uncertain future. Tanuj Virwani has written, acted in, and directed the short film.

Regarding the creative endeavor, Tanuj said,

“I like making short films as it keeps my creative juices flowing. In between I have taken the break because of my work commitments. In my short film, I fell upon this interesting idea of how this girl continues existing in a wrong relationship as she doesn’t have the courage to break away from it . And how sometimes we just need that one person, a catalyst to come and push us into making a much needed and overdue decision. I sounded off the idea to Akshara and she loved it.”

We are excited to see Akshara and Tanuj onscreen together in what promises to be an intense project!