I wish at the end of Tamasha I could go up to Imtiaz Ali personally and bow down to him.

Tamasha lived up to it’s title and more. It created that numb feeling in my heart while watching and by the end I was smiling with tears in my eyes. What do I say about such a film? 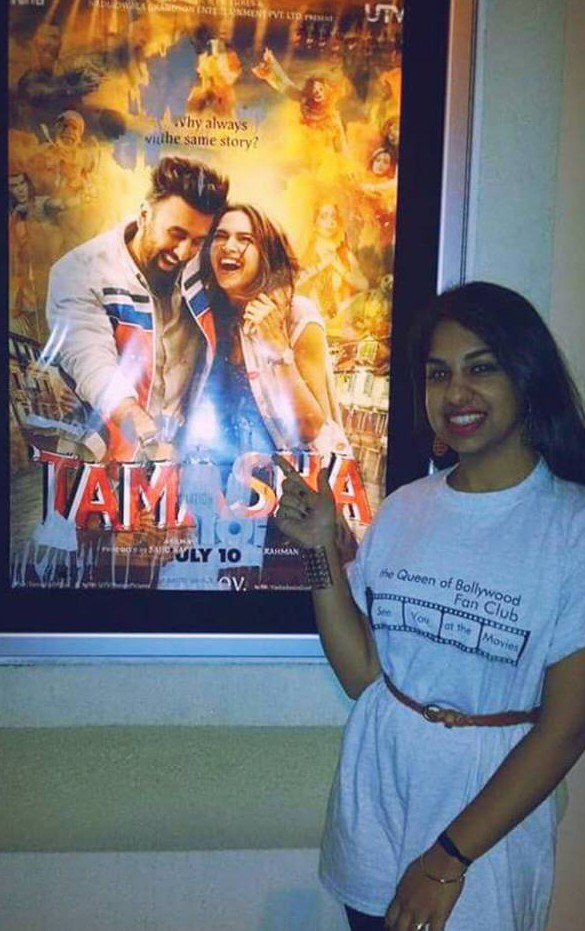 I feel so privileged to be able to sit in a movie theater today to witness such a film. Indian cinema is truly blessed to have a filmmaker and storyteller like Imtiaz. Tamasha is a film with an artistic-cinematic-message that is conveyed through every scene, every dialogue, every gesture, every song, and every moment.

Ved, played by none other than the talented, charming, and outstanding actor of today’s cinema Ranbir Kapoor, is a character I could relate to from beginning to end of the film. He’s a storyteller at heart, but on the outside he seems powerless due to circumstances.

Tara, played by b-towns most beautiful heartthrob and versatile actress Deepika Padukone, is someone every girl wants to be, but sometimes can’t because we have to follow rules and the way of life. She’s go-free-lucky and doesn’t care what the world may think of her actions. She says what’s on her mind and expresses all emotions, happy or sad.

This film is very different from any ‘Bollywood film’ and when I say that I mean by the way the film has been executed on-screen. Imtiaz has told the story of Tamasha in the eyes of a true story-teller. In someways I feel Ved is a replica of Imtiaz Ali himself, because only he can write such a story and release it so well onto celluloid. But that’s besides the point, whether this story may be about himself or really some imagination character named Ved it was beautiful and true to the heart and mind.

All kinds of people would be able to relate to this story. If anything a true cinema lover who wants to go into filmmaking must watch this film. A person who feels lost in their life should watch this film, or a person who is simply trying to understand those who are slightly different from normal people…

The music of Tamasha has stolen my heart since the day they released the trailer. I fell in love with the tunes in the trailer of the film and as soon as Matargashti released, I was floored and couldn’t stop doing the ‘tiaon dance’ everywhere I go. A.R. Rahman is a musical god of cinema and has created a large impact with the film like has done in the past with Rockstar and Highway. Alongside the music, the poetic lyrics Irshad Kamil has written is so unique and beautifully written. Each and every track has it’s own story to tell during each scene and has it’s own one of a kind melody.

Visually the film makes you want to travel from Corsica to Shimla to India’s capital city Delhi, and even Tokyo! The cinematography of the film was breathtakingly beautiful and I know for a fact Corsica is going onto my places to travel list.

I hope one day when I meet Imtiaz Ali I will get the chance to personally thank him for making such a film like Tamasha. There are no words left for me to describe how wonderful this film is!

Urban Asian’s review of Tamasha is

See you at the movies!