Speed Records and Bunty Bains presents Kulwinder Billa with “Sucha Soorma.” After the international super hit tracks, “Timetable” and “Chakkwein Suit” that reached the charts worldwide he is now ready to don the screen as “Sucha Soorma.” “Sucha Soorma” is a Lok Gaatha (True story) about his deceiving sister in law (Balbiro Bhabi) and Sucha’s Friend (Ghukar) to see the full story watch the full video releasing 10th April 2015.

The song is written by Punjab’s finest lyricist Bunty Bains who is currently working with the biggest stars from Pollywood and Bollywood and recently launched his own production company Bunty Bains Productions. Bunty has given his unique spin on this folk track from the lyrics to Kulwinder Billa’s singing style into a raw folk Punjabi style. Bunty Bains created the concept of the audio and visual putting it to screen with director Stalinveer. The music is produced by Punjab based producer Gagz S2dio who also produced the super hit track Timetable and video by StalinVeer who also made Jatti by Harjit Harman. 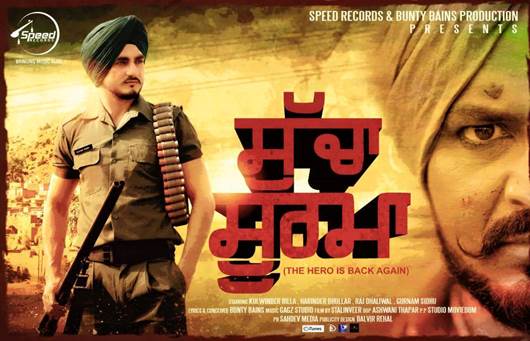 Kulwinder Billa born in Punjab, (Dhaipee) little village near Mansa Kulwinder Billa started singing at a young age and began performing at youth collage festivals. Kulwinder Billa went on to studying at Punjab University Phd Music Vocals. He launched his debut album in 2010 Koi Khaas whilst studying which got him recognition during his peers and fan base. Billa rose to international fame after his songs Timetable which released earlier this year. Sucha Soorma is set to release 10th April 2015 on Speed Records