The J Spring Fashion Show 2015 is model and entrepreneur Jessica Minh Anh’s 9th history-making catwalk featuring a 100-metre floating catwalk on the Hudson River. The highly anticipated showcase is part of Minh Anh’s series of history-making catwalks who is introducing a new fashion experience to the Big Apple.
Pakistani designer Syeda Amera brought to the illustrious catwalk an ultra-feminine collection, including glittering beads, sequined texture, mini dresses, and transparency. Amera’s designs in aqua and blue shades not only accentuated the body but also gave her a modern edge with dynamic patterns and transparency.

Syeda Amera was one of the three designers whose outfits were chosen from the show for the finale. She is the first Pakistani designer to showcase her collection in a show sharing the runway with designers from all over the world in terms of quality, creativity and professionalism. The talented designer said, 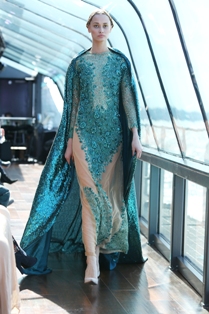 “The whole experience to be honored by being selected to represent Pakistan till when the show ended with the press interviews was surreal…The response was positive; the outfits were really appreciated by everyone be it the media, audience or Jessica Minh Anh herself. The impact people had of Pakistan during the show was amazing and I felt privileged to be a part of this grand show where I made my country proud.”

Amera launched her label in 2008 including prêt, couture and bridal wear. Offering a range of different smart casuals, her main aim is to help women dress in a style that compliments their personality. Her use of feminine patterns and well-cut lines creates timeless designs. Although a relatively new face in the fashion world, Syeda Amera has made a name for herself through her unique and powerful designs. She also participated in Pakistan Fashion Week USA in 2014 in New York.

Commenting on Amera’s collection for the show, Jessica, said:

“Syeda Amera’s designs embody the elegance of a woman while giving her that needed edge. I am attracted to the stunning shades of aqua and blue, beaded details, and dynamic patterns in her collection. I believe the world will fall in love with her.”

Visually pushing the envelope, Jessica created the illusion of models walking on water by having guests seated facing the multi-faceted glass windows of Bateaux New York and watch models walking in front of them while the boat cruised. As a result, New York’s famous skyline and its architectural masterpieces such as the Brooklyn Bridge, Statue of Liberty and One World Trade Center became the natural backdrop for the floating catwalk.

J Spring Fashion Show 2015 is part of Jessica Minh Anh’s series of history-making catwalks at the most iconic venues in the world. Keep it locked for more updates on Syeda Amera!