The official trailer of FDC’s international co-production, Qissa, The Tale Of A Lonely Ghost is out now!

A Punjabi language feature film by Anup Singh, Qissa stars Irrfan Khan, Tisca Chopra, Tillotama Shome and Rasika Dugal. The film has been received well in the International Film Festivals all over for its unique story and performances. 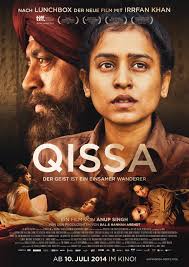 Qissa is about the religious violence during the 1947 partition. The story follows Umber and his family as they move to a safer locale attempting to forge a new life for his family while keeping their true identities a secret from their community by bringing up his fourth daughter as a son. It is here that the story takes a remarkable turn.

History and folklore come together in this tale set in the aftermath of the Partition of India. As Umber’s daughter is raised as a boy, the characters are propelled with greater and greater urgency towards their inevitable fates.

This unique story is bound to touch hearts, keep it locked on Urban Asian for more updates on Qissa!