India has the biggest entertainment industry in the world, with hundreds of movies releasing each year in various languages. Bollywood flicks consist of about 100-200 films a year, now that is a lot of movies to watch! It’s understandable that we might have missed a few over the years. We’ve made you a list of flop flicks that you never knew even existed!

Arjun Rampal and his wife Mehr produced I See You. Arjun even starred in the flick as Raj, a carefree flirtatious bachelor who suddenly encounters a woman only he can see and touch. Apparently she is the ghost of a woman in coma, needless to say Arjun Rampal’s character, Raj, falls for this beautiful ghost Shivani. The story turns into a mystery as to why Shivani’s doctor is trying to kill her and how Raj can save her. Sound familiar? probably because Hollywood made something similar first. Though the music was decent, the storyline not totally bland, and there was a mini-cameo by Arjun’s friends, Shah Rukh Khan and Hrithik Roshan, this movie never saw any attention. 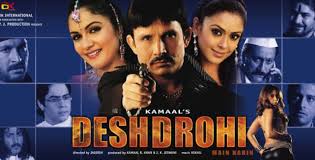 Kamaal R. Khan starred and produced the film Deshdrohi, do I really need to keep going? This movie portrayed North Indians in such a bad light Maharashtra banned the movie! The storyline followed a North Indian who moved to Mumbai and got involved with gangsters and pimps. He falls in love with a girl and suddenly they’re on the run from corrupt politicians as well? This movie is such a hot mess, all I can say is WHY GRACY SINGH! WHY! We had such high hopes for you!

Ayesha Takia and Vatsal Sheth star in this teenaged flick. Though these stars are well loved today, this movie is from way back at the start of their career. Vatsal plays Raj, the only son of car designer Deven Choudhary. Deven is killed by his competitor, Rakesh Kapoor and Deven’s spirit becomes trapped in the car Deven named Tarzan. Years later when Raj finds Tarzan he rebuilds it and now the car has a life of it’s own, literally! The car starts killing people that were behind Deven’s death! Of course Raj has to fall in love with the enemy’s daughter, Priya. Clearly they took this Knight Rider route that didn’t work out too well.

The Xpose was a Himmesh Reshammiya and Yo Yo Honey Singh starrer set in the 1960’s, I think that explains it all. These musicians need to keep doing what they do best, make hit songs. The film was a mystery surrounding the death of an actress played by the recent Bigg Boss contestant, Sonali Raut. This flick didn’t even leave a dent in the wall and if Sonali Raut wasn’t on Bigg Boss I doubt people would have bothered looking this up.

Boom is a film starring Katrina Kaif, yes I said Katrina Kaif! I’m sure even die-hard Katrina fans didn’t even know about this one! Despite it’s all star cast of Gulshan Grover, Amitabh Bachchan, Jackie Shroff, Padma Lakshmi and Madhu Sapre. this 2003 film barely received one star from critics. The film is about three models, (Katrina Kaif, Madhu Sapre and Padma Lakshmi) who are best friends. As a rival model trips one of the girls on the runway, all three set out to attack but instead they accidently ruin a diamond heist. Now the three mobsters, Grover, Bachchan and Shroff, are out to get the girls. (I couldn’t even pay attention to the story while writing this up, that’s how bad it is!) The only gem in this heist, the film featured Panjabi MC’s “Mundiyan To Bach Ke,” and Rishi Rich, Juggy D and Jay Sean favorite “Nachna Tere Naal.” 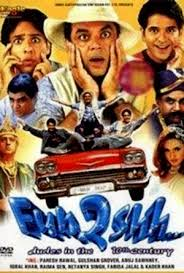 Fun2ssh is a fantasy film where the lead characters,  Iqbal Khan, Anil Swahney and Paresh Rawal are transported back in time while they are trying to catch the thief who stole Emperor Babushah’s crown. They need the crown to clear their name but once they realize they really are in the 10th century getting home is the big issue. Though most people don’t know about this 2003 flick it’s actually not too bad if you consider it a children’s movie.