Saint Gurmeet Ram Rahim Singh Ji Insan’s new movie is all set to bring a revolution with its social reform approach with a bit of Bollywood flavor. The trailer of ‘MSG – The Messenger of God’ is released to an enormous digital reception. The film is about the strife between evil doers and Gurmeet Ram Rahim Singh Ji Insan’s humanitarian vision of reforming the world into a better place.

Guru ji’s this spiritual statement has gone viral online. Guru ji mesmerizes the audiences in the trailer chanting Dhan Dhan Satguru Tera Hi Aasra as millions surround him to seek aid against the wrong. He is seen sporting trendy cars and bikes, making a style statement and taking on the goons single-handedly. 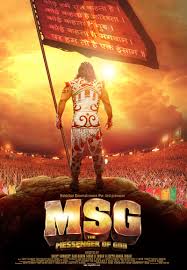 The film promises to be a thorough entertainer and keep the audience glued to their seats while they watch Saint Gurmeet Ram Rahim Singh Ji Insan set the screen on fire. With over 50 million followers, mostly amongst the youth, Guru ji’s ‘MSG – The Messenger of God’ is sure to do wonders in the box office. This film introduces new faces playing distinct strong characters with a social message for its audience.