Kamaal R Khan’s name is synonymous with controversy. Everytime this guy hits social media he’s causing some chaos. Recently he was posting tweets like “Pls RT if you think @DeepikaPadukone has the biggest butt in Bollywood” and he goes on listing other actresses like Parineeti Chopra, Katrina Kaif and more. When people were outraged by his tweets his response was, this is just a survey. Sonakshi Sinha however had a solid response for him:

This time Kamaal R. Khan has targeted Parineeti Chopra and Sonakshi Sinha calling them “sumo wrestlers” on facebook! He then cropped out just Parineeti Chopra from the picture and tweeted it with the caption “Good morning and God save me from this sumo wrestler. Iskaa Ek Dhobi Pachaadh n Aadmi finished.” 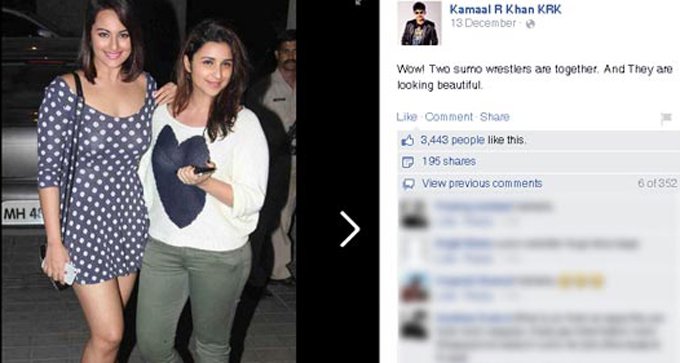 Has Kamaal R. Khan taken this too far? Has his outrageous comments gone too far? What do you think?