Super talented actor and singer Ali Zafar earned laurels for his latest Bollywood outing, Kill Dil, where he played a role much different from his persona and nailed it. 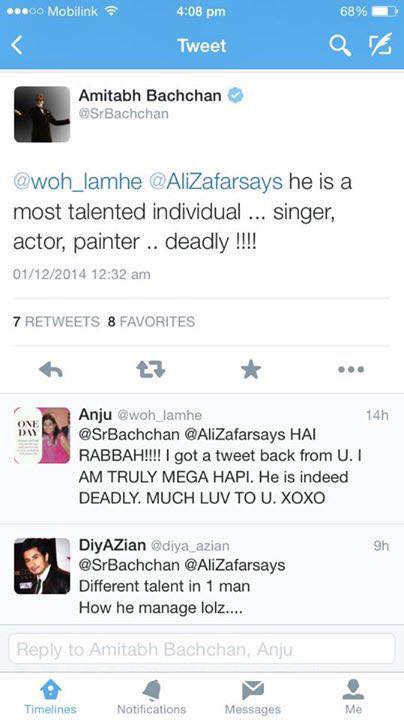 Ali not only won over hearts of audiences and critics in Pakistan, but in India also. While critics in India showered praises on Ali for displaying oodles of talent and versatility through his character in Kill Dil, Tutu, and holding his own in the film, several Bollywood film stars, including Ali’s co-actors also did not hesitate to acknowledge his multitalented abilities.

Recently, it was none other than the ‘Shehenshah of Bollywood’, the biggest superstar in India, Amitabh Bachchan, who took to social networking website Twitter to express his opinion about the Pakistani export to India. Bachchan tweeted:

“He is a most talented individual…singer, actor, painter … deadly !!!!”

in response to someone’s tweet about Ali. And when a star of Bachchan’s standing uses such words for an artist, it means he does have genuine talent.

In response to Bachchan’s tweet, a humble Ali says:

“Such praise from a man of such stature means more than any award or accolade.”

Kill Dill became the third highest grossing movie on 2014 on its opening weekend in Pakistan pushing aside Bang Bang. Besides Ali, it stars Ranveer Singh, Parineeti Chopra and Govinda.