Bollywood’s brightest stars headed to Hyderabad, India on Nov 18 for the wedding of Salman Khan’s youngest sister Arpita Khan! The beloved little Khan sister tied the knot with her long-time fiance and businessman Ayush Sharma at a gala ceremony.

Preparations for the wedding were in full swing at Taj Falaknuma, the luxury heritage hotel of the Taj Group located in the old city. The actor’s family has booked the entire hotel for two days, Nov 18 and 19, to ensure that nobody gatecrashes the festivities. Salman Khan is said to have paid Rs.2 crore to book the hotel for two days. The family will have its own security to screen the guests. The hotel staff will work as per their instructions to ensure smooth arrangements. All the wedding planners, caterers and specialists providing services from makeup to decoration to mehendi and sangeet will be flown in from Mumbai for the grand celebrations.

The popular star, who has a huge fan following in this city, has invited Prime Minister Narendra Modi for the wedding but the latter is unlikely to make it. The superstar personally met Modi a few days ago in Delhi to invite him but the the prime minister expressed his inability as he will be away on a three-nation tour to Myanmar, Australia and Fiji. 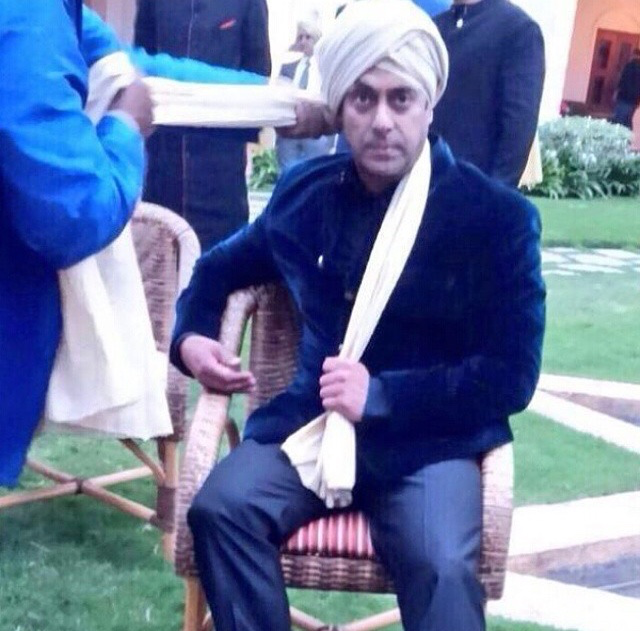 From Tollywood, as Telugu film industry is popularly called, actor-turned-politician Chiranjeevi, his son Ram Charan Teja, Nagarjuna, Venkatesh and their families will be among select guests. Salman and his father Salim Khan have invited leading politicians, sports persons and corporate honchos for the ceremony. About 300 guests are likely to attend the wedding.

Bollywood celebrities usually head to Jodhpur for marriages at the opulent palaces-turned-luxury hotels but this is the first time that a leading Bollywood family chose Hyderabad. The palace, which the Taj Group converted into a luxury hotel and threw it open four years ago, has 60 lavish rooms, decorated halls and a 101-seat dining hall, said to be the biggest in the world. Its Durbal Hall, embellished with intricately carved wooden ceilings, parquet flooring, regal walnut wood furniture and handcrafted mirrors, had once hosted guests like King George V and Czar Nicholas II. It was Nawab Vaqar-ul-Umra, the Nizam’s prime minister, who built the palace in 1893. Impressed by its magnificence, the Nizam bought it for himself.

This wedding has everyone buzzing, the grand location, glamorous stars and of course the beautiful bride. We wish Arpita Khan and Ayush Sharma a beautiful wedded life together!