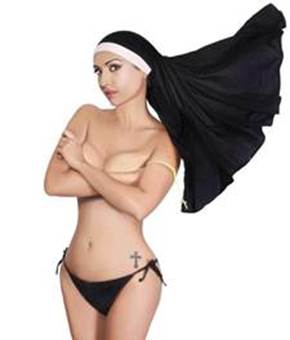 The US may have the Kardashians – and especially Kim Kardashian (see most recent news here) – to stir up controversy and keep the press on their toes, but India has their own expert media grabber!

Bollywood Star and Model, Pooja Misrra, has always managed to grab headlines with everything she does!  Back in the day, when she was a contestant on Bigg Boss 5, she became one of the series most infamous and polarizing contestants.  She became associated with the phrase “Spare Me!”, which became her slogan.

Now, the model-actress-singer, has decided to release her first ever topless picture on twitter!  The former FHM cover girl got daring as she posted a sexy pic of herself topless wearing a nun’s veil!  The star, who is never one to be shy, hopes this picture takes her from being simple to smoldering hot.

Regarding her reasoning for posting the photo, she shared,

“I posted this picture to tell all that every women should embrace her sensuousness and get liberated. If you have a great body flaunt it! I feel the Nun to No-mad caption is what came to my mind keeping my own self as an example, from a Hindu Brahmin girl next door to now me embracing and enjoying my body. Just because we are Indian doesn’t mean we can’t be sexy!”

The picture posted was captured at her former FHM cover shoot, which was held back from being printed in the publication. Pooja Misrra is going from bold to bolder with all these smoking hot pics and is currently working towards her debut music release set to hit the music stands early 2015!  Keep it posted to UrbanAsian for all the details!