The album and movie is making buzz all over the net! And why wouldn’t it be? Gulaab Gang is one of the most talked about films of the year which also consist of some amazing tunes! The compelling new song- ‘Dheemi Dheemi’– from ‘Gulaab Gang’ is now live on YouTube! This song is a perfect jugalbandi of classical and folk. Soumik Sen’s composition gives you the feel of a street play and a duel going on between the singers. The lyrics are fitting but it is the musical duel that would keep you wanting to listen to the song over and over again. If you are a lover of any form of Indian music, you would definitely want to keep this one in your music player for a long time. It’s a classical taste!

It is after 13 years that Madhuri Dixit and Saroj Khan have come together to re-create their spellbinding magic on-screen. Choreographed by Saroj Khan, the video shows the women of Gulaabi Gang taking a stand against the injustice faced by women and how they have sworn to fight for it with their lives. With its rural background score and powerful lyrics, the track invokes an enigmatic strength within the listener. Composed by Soumik Sen, the song has been sung by Kaushiki Chakrborty and Malabika Brahma. 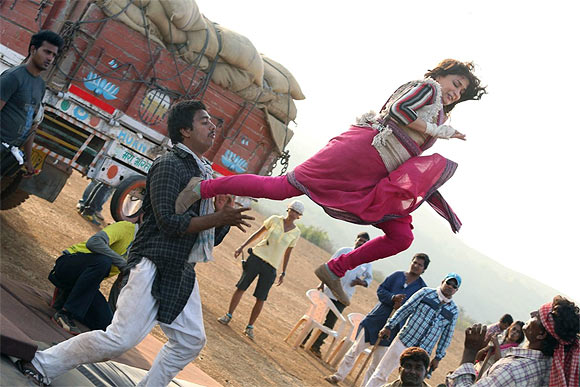