I will again repeat, There are times when we see wonderful films such as Strings Of Passion, But we still don’t see them because of various reasons. Lack of promotion and publicity would be the first reason, Of course. Lack of proper Cinema Halls and Cinema Timings. Lack of the presence of huge star-cast. 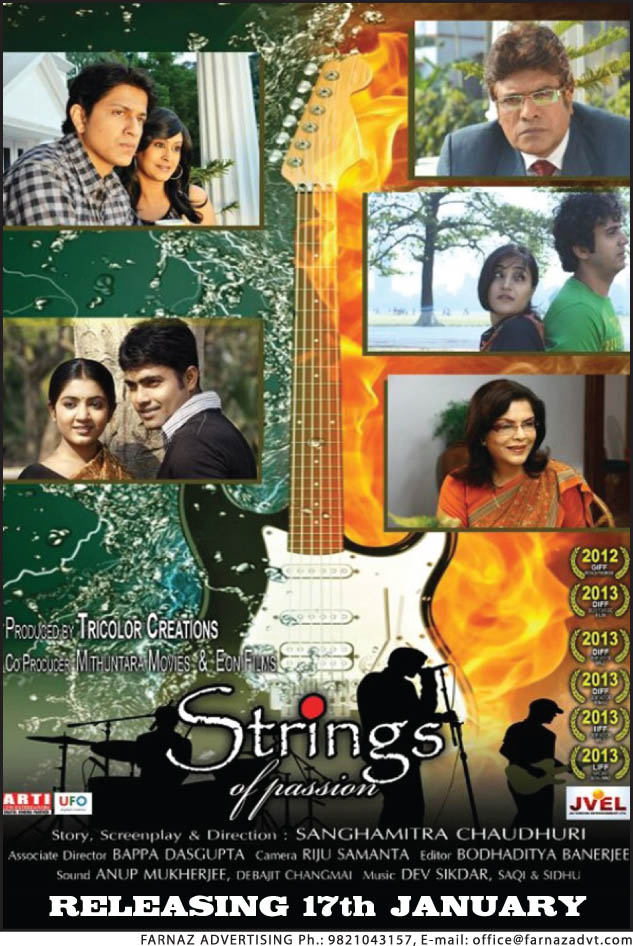 But yes, Films such as Strings Of Passion are a kind of cinema which grows on you like a slow poison even if you have left the auditorium.

Strings of Passion is a story of three boys who meet after a period and begin to relive their past. Neel, Manu and Amit are from a software engineering collage and they have a band named Strings of Passion. They fall prey to family problems take emotional routes to suffice. Insia, Komal and Tuktuki are three young women who stand by their side and spice up their blandness.

Neel is brought up by single father. Devoid of affection, love and care, He is frustrated about love and life. He runs away with his father’s fiancée, Insia who fills his emptiness with care and emotion. Manu’s dominating mother influences him to adopt a feminine trait and he falls prey to a gang rape. He commits suicide. While Amit’s isolated from friends, depressed and insecure, finds his soul-mate in a village lass, and loses her in a sway and is left shattered to pieces.

Speaking about the acting part, From Shubh Mukherjee to Zeenat Aman to Indrani Halder to Rajesh Verma and even new faces like Sonali has given a Rock-Solid performances and lived their characters to the core. On a Frank Note, Strings Of Passion is a movie which relies totally on acting skills of the players.

Sanghamitra Chaudhuri is a woman herself and has written and directed this film. Kudos to the woman for making such a brave cinema fearlessly. Why did i add the word Fearlessly? You have to see the film to find out.

The only and only weakest part in this whole beautiful film was it’s cinematography by Riju Samanta. The camera work of the film was really bad. The mood and the lighting showed beautiful looking actors (Zeenat Aman, Indrani Halder) in a horrible way. Especially Indrani Halder looked over her age because of the cinematography. According to me, Sanghamitra Chaudhuri did this one bad mistake.

The music part and editing was again very wonderfully done. The music of the film actually went with the story’s flow.

Strings Of Passion has already made a decent name in Film Festival market and i strongly recommend this film to everyone who is looking for something new in Cinema. I would have gone ahead and gave this gem a Four star, But i am sticking to Three because of it’s Bad Cinematography.

Strings Of Passion is a wonderful poetry that should be watched and please ignore the Camera work (A Humble Request).