It’s rare to see Bollywood stars (besides Salman Khan who promotes “Being Human” 24/7) stand up for a cause.  However, one other actor who has a heart of gold is heartthrob, Arjun Rampal.  Recently, the Bollywood actor, along with PETA representatives, met Maharashtra State Forest Minister Dr Patangrao Kadam at his residence to hand-deliver a letter. The letter urged the minister to take immediate action in order to ensure that 14-year-old abused elephant Sunder to a sanctuary from a temple in Kolhapur.  Please note, footage of the abuse has not been included in this article because it is quite graphic.  However, if you want to see the extent of the abuse, all you have to do is a google search. 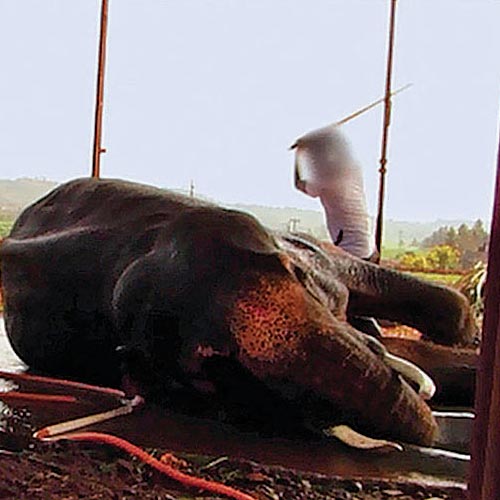 The forest department has claimed that the elephant was in a “musth condition,” which was the reason it had been behaving aggressively and was refusing to be moved.  However, an affidavit filed by the state forest department later contradicts their own statement!

“The affidavit filed by the state forest department later refutes their own statement, saying the elephant was not in a musth condition. It said that they had got a veterinary specialist to examine the elephant who confirmed the same,” said Dr Manilal Valliyate, who had filed the petition on behalf of PETA.

Although both Minister Kadam and the High Court of Bombay have ordered that Sunder be transferred, he is still in the hands of his abusers.  A decision regarding the case is said to be made today (23rd January).  Arjun Rampal has also extended an offer to the Jyotiba Temple in Kolhapur, where Sunder had been chained, to donate a life-size statue of an elephant in exchange for transferring Sunder to a sanctuary that PETA has identified.

In his letter, Rampal wrote:

“I am deeply saddened to learn that, despite your and the High Court of Bombay’s orders, the young elephant named Sunder has not yet been moved to a sanctuary where he can live his life free from chains and beatings that he continues to suffer”.

Joining Rampal in his call to #FreeSunder have been Amitabh Bachchan, Madhuri Dixit, R Madhavan, Raveena Tandon and many other top celebrities who took to Twitter or joined the campaign in other ways as well as more than 80,000 people who have signed the online petition on PETAIndia.com calling for Sunder’s release.