I had a chance to listen to a pre-release of the soon-to-be-released punjabi devotional album called, “Satnam Waheguru” by Manika Kaur with music production by Sukhbir.  After listening to this album, I can say for sure that Manika Kaur should be known as “Magic” Kaur because there is pure magic in her voice.  Manika has such a unique vocal tone – there’s something rustic about it, but also modern.  She has the power to draw in the listener from the very first line of her album, which is exactly what is needed for a devotional album.  “Satnam Waheguru” is so soothing to listen to.  The album successfully keeps the focus on Manika’s singing without trying to overpower her vocals with loud instruments.  Those of you who read my reviews know how annoyed it makes me when you can hear the singer breathing into the mike between lines.  Thankfully, that is not a complaint in this album.  The only thing you can hear and feel in this album is Manika’s intimate connection to her music and Waheguru.  You will fall in love with the album within the first few minutes.  Also, it is nice that the album booklet contains English translations of all the Punjabi lyrics.  My only one complaint is that I wish there was a little more variety in terms of sound from track to track.

Congrats to Manika Kaur on an amazing debut, and Sukhbir for his perfect music production.  Kaur’s album, “Satnam Waheguru” is one of the best album’s Punjabi music has heard in a long time.  It’s a must have for any lover of music!  Even those who don’t understand Punjabi will enjoy this album.  “Satnam Waheguru” is officially out on January 21, 2013 via Invincible Music, with pre-orders available immediately. 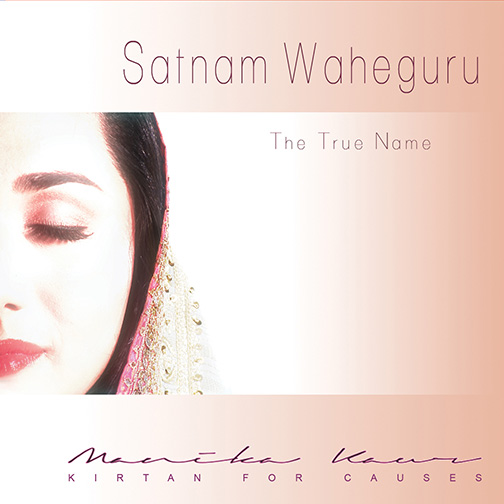 This track is the perfect start to this devotional album.  This is what a well-produced track should sound like!  Manika’s diction is precise and her understanding of the lyrics perfect.  The song begins with a very short violin intro and then immediately focuses on the purity of Manika’s voice.  One minute into it, a tabla backdrop is added.  Rather than detracting from her singing, the instruments and occasional male chorus and cymbals provide light support for her voice.  The instruments do not consume it, as current tracks in Bollywood tend to do.  This track is 11 minutes, but you don’t even realize when the time passes.  In fact, when it ends, you wish it hadn’t!  It’s my favorite on the album.

This track begins with a piano intro.  The vocal layering in track is done really well and at the right moments.  Manika carries the tune perfectly, with the male vocals adding a perfect accompaniment to her lovely vocals.  She showcases her lower register quite well in this track at the beginning.  When the guitar comes in around 7 minutes into the song, it too, takes the track to a whole new level.  I took off .5 only because I wish the track had utilized the piano again at the end to make it feel more complete.

This song has a very summery feel to it.  It begins with an acoustic guitar intro before Manika’s starts singing.  Manika sings the English translation of the Punjabi lyrics in this track partway into the track.  She handles the English diction perfectly as well.  By the end of the song, you will find yourself snapping along to the beat.  No complaints on this track.

Like the others, this track uses minimal instrumental accompaniment.  It basically has a guitar, tabla, and Manika’s vocals. Manika’s voice sounds quite jazzy on this (think Norah Jones).  I took off .5 on this track because the male vocals, because of the very low register they were singing in this song, seemed a bit distracting.

This track is another strong one on the album, and probably has more accompaniment than any of the others.  The song is introduced with a violin, but then Manika begins to sing to no musical accompaniment.  The listener can’t help, but notice how good Manika’s voice sounds.  She is then joined by a tabla accompaniment, male chorus, violin, and cymbals.  I don’t know why, but this track reminded me of the golden era of Bollywood music.  It sounded like it easily could have featured in an RK (Raj Kapoor) Production back in the day.  “Milhu-Pi-Aaray” is another very nice track.

This track features Manika, a male chorus, and percussion (tabla, cymbals) and violin (minimally on this track though) as accompaniment.  I took off 1 point because it sounded a bit too much like tracks 1 and 2.  However, no complaints with regards to Manika’s singing.  The earlier tracks in the album set the bar quite high, so adding some more variety in tone and composition would have made the track even better.  Still, it was a great end to a great album.