Having just finished an extremely busy semester of law school, I was excited to have a non-law book to read during my winter break.  The book, “The Young Graduate on a Student Visa” is written by Pushpa Gowda and it is her debut novel.  Currently, the book is only available in the Kindle format (purchase here). 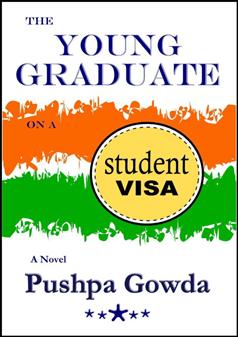 The story focuses on Manasvi, a young Indian graduate, who has big dreams of coming to the United States (US).  Her perspective of the United States has been largely influenced by television shows about the US.  Manasvi hopes to pursue her master’s degree in the US.  However, there are road blocks on her way.  For one, she will have to start completely afresh all by herself in a foreign country.  She has never really been independent and has never lived away from her family and friends.  Also, she does not have money to pay for her trip or education!

Her journey takes place during the dot-com boom of the nineties, when Manasvi comes to the US all alone on a student visa.  As mentioned above, Manasvi’s notion of the US is largely informed by Cable TV shows, so as expected, it is quite sugar-coated.  However, her real American adventure starts when she’s stranded in the airport in Mississippi.  She hopes the LAPD will rescue her, as she has seen them do on the hit TV show!  Unfortunately, the real world is a lot harder than the larger-than-life imagery depicted on screen that have colored Manasvi’s views.

Manasvi’s story will resonate best with individuals who have actually gone through the process of entering the United States as an immigrant.  Personally, I was born and raised in the United States.  However, having heard tales from friends, the immigrant story of finding success in the promise land was not a foreign concept to me.  Furthermore, the story was easy to connect to as it is the story we all encounter on a macroscopic level – i.e. the journey from being an innocent youth, and growing into a wiser adult.

The story recounted in the book is based on Pushpa’s own experiences as well as stories from friends and family of the immigrant experience.  As such, she successfully captures the immigrant experience in full – the fear of entering an unknown world, the growth one experiences, and the eventual acceptance into the new culture.  This is the book’s strength as it makes the story feels real.  It is also a plus point that the book did not just focus on arriving in the United States as being the character’s primary victory.  For example, in Chapter 11, the author writes, “Since none of her family members had seen or known much about America, it was difficult for them to relate to some of the small pleasures and accomplishments that Manasvi was proud of. Manasvi’s accomplishment of obtaining a driver’s license after learning driving in just one day and passing the driving test didn’t get the applause she expected.”  It is these little victories that are perhaps most important to one trying to make it in a new world by oneself.

For a debut novel, Pushpa has done quite well, but there is definitely room for growth.  On kindle, the book is a whopping 4,212 pages.  It is the length that perhaps is one of the drawbacks, as it feels a bit too detailed and dry in parts.  In the author’s quest to convey the full immigrant experience to readers, the book often drags as there are too many events and themes – love, relationships, family, education, racism, friendship, and even a road trip! – that are trying to be portrayed.  The book often loses the reader’s interest by going too much into recounting descriptions and details.  As such, I wish that the story was more focused (i.e. not trying to tackle too many themes at once, but rather focusing on a few main ones), and that the book as a whole felt more complete.  Pushpa is planning a sequel, so perhaps that is why it did not feel like there was a satisfying conclusion to this part of the book.  However, overall it was a decent debut and worth a read for anyone wanting insight into the immigrant experience.

Purchase on Kindle at Amazon: http://www.amazon.com/dp/B00CB9AI3M