Bullett Raja is the story of a common man, Raja Mishra, who transforms into a dreaded gangster of the Hindi heartland. A victim of the system and chained by it, Raja’s life changes as he takes on those that rule and shakes the very foundations of the nexus of the police, the government, and the industrialists. As he rises and revolts against the system becoming an outlaw, Bullett sets ablaze the nexus and changes the landscape forever. The powers that be, fight back in a compelling struggle for power and money against the backdrop of personal ambitions, greed and revenge. Redefining love, friendship and loyalty, Bullet Raja creates a world, where a common man, tests his endurance and fortitude against the very system he once obediently followed and then declared a war on it! Directed by National Award winner, Tigmanshu Dhulia, Bullett Raja top lines leading Indian stars- Saif Ali Khan and Sonakshi Sinha.

Check out what Saif Al Khan tells us about Bullett Raja! 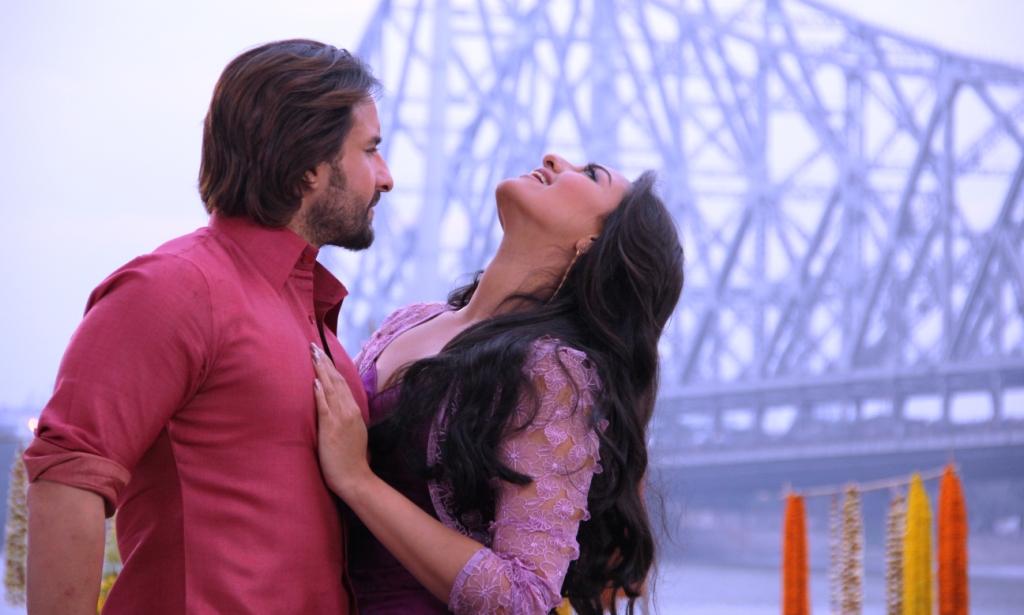 Urban Asian : Can you tell us about your character in Bullett Raja?

SAK: It’s a thriller about somebody who is quite an intelligent guy. He’s from a well-to-do Brahmin family so it’s very surprising that he ends up in this line of mafia work. But there is no other option for him. It’s the rise of a gangster but his personality is larger than life and Tigmanshu has made it a point to make it lovable and entertaining.  So he’s very charming with women and great to his friends. He’s also violent and has a temper but he’s a nice fun guy. Bullett Raja is quite a star as a character. The kinds of clothes he would wear would be quite flashy, and I think he’s aware that he’s a charming guy.

UA: Tell us about the catchy title of the film and how it came to be.

SAK: Titles are very important. I can’t remember the title that Tigmanshu wanted to call it . oh . Jai Ram-ji! Can you imagine!? It doesn’t sound like a fun title. We had a title called Revolver Rani. Instead of Revolver Rani we said why not Revolver Raja? And then if not Revolver Raja, why not Bullett Raja? That’s how it actually came. I think a lot of people liked the title instantly.

UA: What kind of look were you going for?

SAK: You need a certain ability to look serious on screen. You have to be able to effectively threaten some pretty scary looking people. The supporting cast of Bullett Raja has some pretty scary characters. The challenge is to not look like some kid from a love story trying to be tough. It is the role of a young tiger.

UA: What was it like working with Sonakshi Sinha?

SAK: It’s really nice working with Sonakshi. And it’s a nice pair-up that grounds Bullett Raja. It’s an interesting role for her. She’s from Calcutta and she’s somehow in Lucknow as a struggling actress . meeting Gulshan Grover for a part. (smiles) So she’s definitely on the wrong track. Totally. And luckily she meets Bullett Raja who also is on the wrong track. So two people on the wrong track meet and find something special. And that’s romantic. She has a sense of calm, and patience, and simplicity. She doesn’t seem to be like a star who is in a rush. She’s very patient, kind, fun.

SAK: I’ve enjoyed working with Tigmanshu a lot. He’s got a slight artistic streak in his commercial films. He’s a little quirky in his scenes and unexpected in terms of dialogue and presentation. We have one thing in common which is that musically we both like Deep Purple a lot and particularly Ritchie Blackmore, the lead guitarist. This is important because it means that you’re similar in some way. It must mean that you have similar artistic values.

Ideally an actor should be an extension of a director’s mind. I think this is one of my best performances. We agreed on so many things. Things like how Sergio Leone would shoot the Spaghetti Westerns that Clint Eastwood acted in That was more the zone for the gun fighting we wanted.

UA:The action sequences in Bullett Raja look very physically demanding, did you have to get in shape for the film?

SAK: I wasn’t fit when I did the Race 2 run. I was okay but I am way fitter now and it looks different. If you are fit your body language changes. You are more agile in the kind of action you do, particularly like in Bullett Raja, it’s incredibly physically demanding. It’s a great feeling when you are fit and you are looking good on camera.

UA:100 crore used to be the benchmark for film success in Bollywood but with films like Chennai Express breaking the 200 crore mark, will Bullett Raja break that record?

SAK: Oh I don’t know, it’s so hard to tell. I am really happy with Bullett Raja and how it has shaped up. It’s a really nice movie but who knows how much it will make.

UA:As an actor, how important is your image?

SAK: I don’t know how important it is for an actor to have an image because an image can sometimes stereotype you. There are many other aspects that contribute to an actor’s income such as being a brand ambassador and for those aspects your image is very important, but for acting itself I don’t think it is very important.

SAK: It depends on the role. Right now in India I am being offered great roles and I love my job because we work really hard at what we do, but we get the time to relax also. So yes, I would like to work in Hollywood if I was offered the right role, and if it did not conflict with my work in India, I am not interested in raising my profile internationally for the sake of it, it would have to be because it interests me first and foremost.

UA:In Bullett Raja you take on a completely new avatar, can you tell us a little about the movie and your character?

SAK: The starting point for the film was the kind of films these guys have been making — Saheb, Biwi Aur Gangster and Paan Singh Tomar. I don’t watch too many films, maybe I should watch more, but I’m clued into these films. Somewhere I had put it out that I wanted to do such films and I also wanted to work with Tigmanshu. And it worked out. We had met a few times and we were discussing various scripts when I finally said, ‘Look I leave it to you. I’m okay with whatever you come up with’. Luckily for me, the film we zeroed in on was something really exciting. We were talking about all kinds of films but not this — it’s more of an Indian Scarface. It’s an interesting role, which involves total acting rather than playing an extension of my own self. That’s rare.

UA: This is the first time you are doing a film opposite Sonakshi, how was it working with her?

SAK: Sonakshi’s very nice. I like her work in films. She’s genetically an industry child. They are different. They know how to act and behave and Sonakshi seems like a well-brought up girl.

UA: You too are an industry child…

SAK: Not at all. I’m an outsider to this industry. I haven’t been brought up in a filmi atmosphere. Not that it’s good or bad — it’s a fact. We were brought up in a cricketing house. Of course, I remember visiting film sets as a child, but that was different. I had no understanding of what was going on. There’s a way of behaving in the industry which you learn. But people like Sonakshi or Kareena know it from the start.

UA: You started working on Bullet Raja just after your wedding. How are you catching up with Kareena?

SAK: It’s just a matter of time management. Your work is also important. You do a little bit of work and then you are at home. You shouldn’t change too much, you must still be able to get on with your own life but then put aside some time to spend with your loved ones too.

Be sure to check the film out which hits theaters this Thursday in America and worldwide this Friday!