Shahid is all back on screen now and the poster shows that the movie might look hot as it looks! Not only is Shahid looking hot in this poster but so is the amazing Soankshi! The pair would be working together for the first time on screen! We wonder if the romance leads to even more? Guess we will just have to wait and find out.

R Rajkumar is the story of a young man without a purpose in life named Rajkumar (Shahid Kapoor). A rebel without a cause, he leads a carefree life and works for a drug baron named Shivraj (Sonu Sood). His life changes as one day he sees Chanda (Sonakshi Sinha), the epitome of beauty. Although she is educated she has a rustic charm. Her parents died when she was young and her only surviving relative is another drug baron named Manik Parmar (Ashish Vidyarthi) who is the arch rival of Shivraj. Both Parmar and Shivraj owe allegiance to a Mafia Don named Ajit Taaka (Shri Hari) who operates from Malasiya. 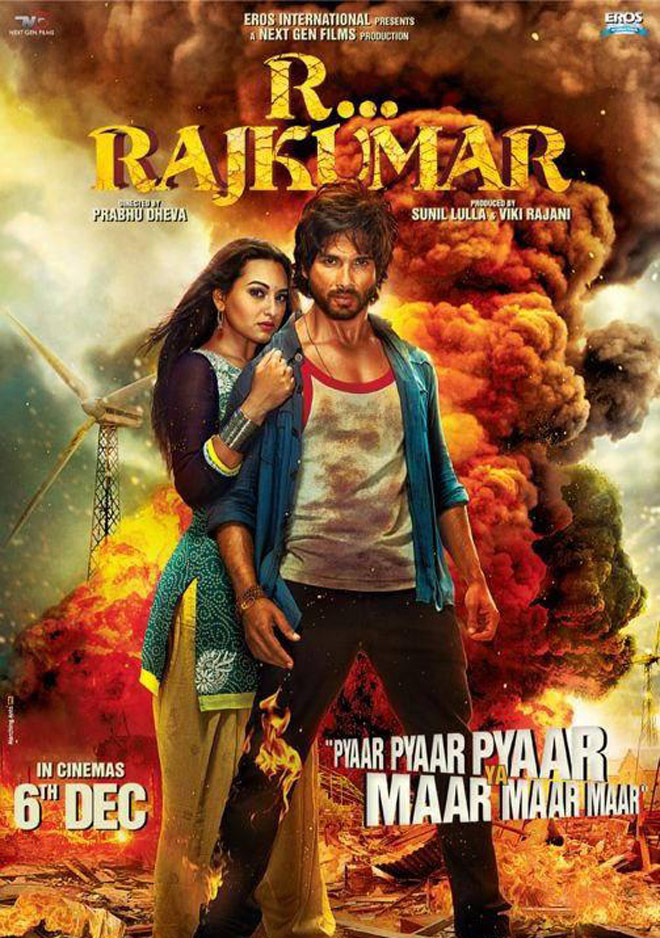 Rajkumar falls head over heels in love with Chanda without knowing that she is the niece of Parmar who he has been ordered to kill by his Boss Shivraj. After some wooing Chanda succumbs to Rajkumar’s charm and falls in love with him. But before their love can flourish a deadly secret unfolds that shatters Rajkumar’s world. He has only one option left, if he wants Chanda he has to destroy the deadly drug cartel that is operated from Madhya Pradesh and has its roots in Malaysia.

What is the deadly secret that has in a moment turned Rajkumar’s life into living hell? Will Rajkumar manage to destroy the huge drug cartel and get Chanda? And last but not the least, will Rajkumar live to tell the tale?

All these questions and many more thrills action, songs and entertainment will unfold as the movie releases on December 6, 2013! Guess we will just have to wait and find out!