Tickets are now on sale for two extraordinary productions grounded in South Asian culture at Lincoln Center’s White Light Festival this fall: The Manganiyar Seduction (October 31, November 1 and 2 at 7:30pm), performed by approximately 40 singers and instrumentalists from Rajasthan state in Northwest India directed by Roysten Abel, which premiered at the White Light Festival in 2010; and the U.S. premiere of DESH (November 6 and 7 at 7:30pm), a solo dance performance rooted in traditional kathak and modern dance by celebrated choreographer and performer Akram Khan. Both productions will take place at the Rose Theater in Frederick P. Rose Hall at Broadway and 60th street, the home of Jazz at Lincoln Center.

When purchasing tickets, readers of UrbanAsian can get a discount of 20% off the ticket price by entering the code: UrbanAsian

Tickets begin at $25 for DESH and $35 for The Manganiyar Seduction. Tickets for White Light Festival are available online at WhiteLightFestival.org, by calling CenterCharge, 212-721-6500, or at the Avery Fisher or Alice Tully Hall box offices, Broadway and 65th Street.
Programs, artists, and ticket prices are subject to change.  See below for details on both these productions. 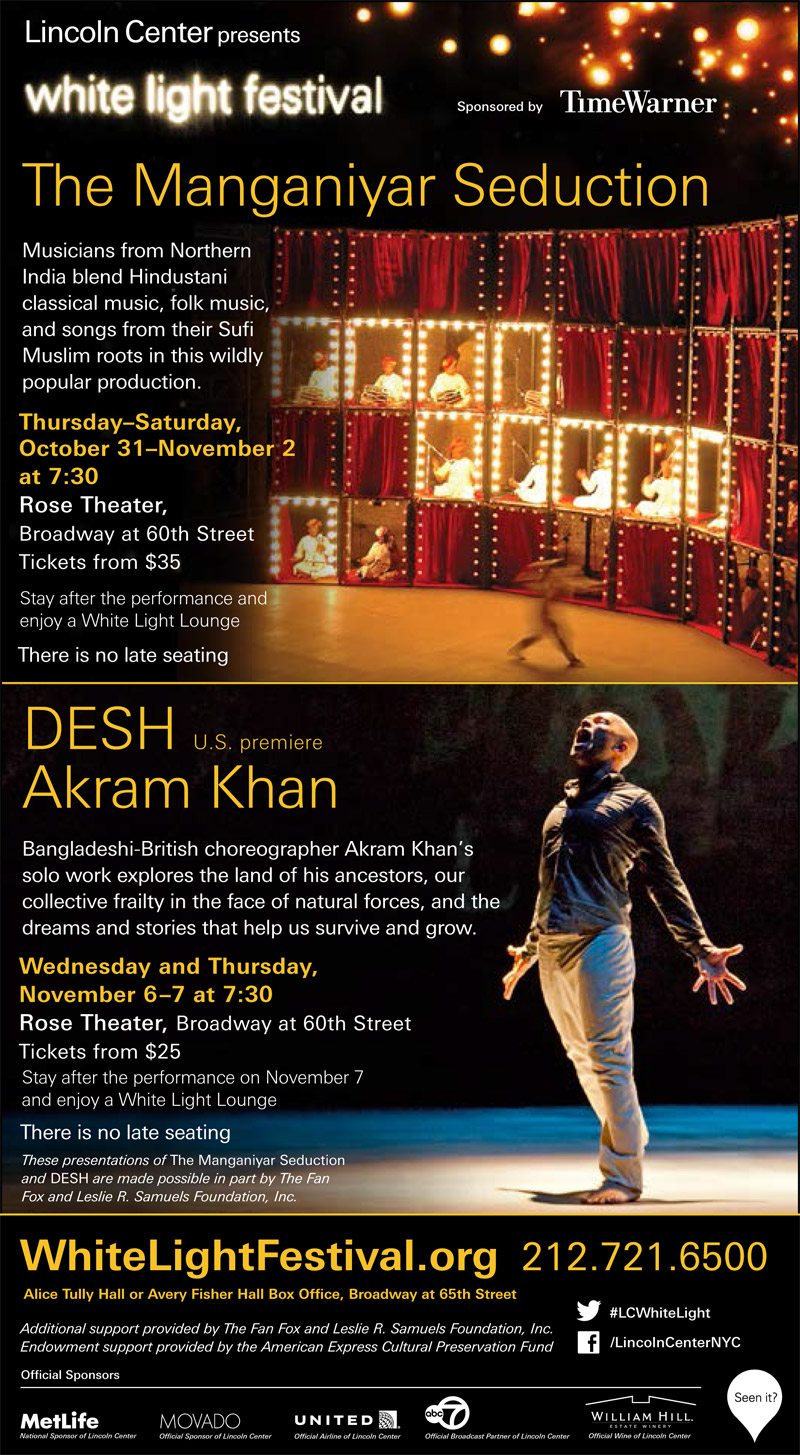 The Manganiyar Seduction features a dazzling stage set that displays four levels of boxes outlined in lights, each box faced with red velvet curtains covering a musician. The design was inspired by the women’s quarters of Hawa Mahal (a royal palace in Jaipur) and the red light district of Amsterdam. Breaking with Indian music’s “conductorless” tradition, The Manganiyar Seduction’s musicians are led by Daevo Khan—who also plays the traditional wooden block instrument known as “kartal.” ConcertoNet described the music’s effect as “A Wall of Sound which Phil Spector would have gasped at.”

The Manganiyars are a caste of Muslim musicians from Northwest India who originally performed for the kings of Rajasthan, and have incorporated the worship of Hindu deities into their Muslim faith. They play a mix of folk and classical Indian music ranging from Sufi mystic songs and ballads about kings, to Hindu music for births, marriages, and other celebrations. “They have their Muslim saints and worship Allah,” said Abel in an NPR interview, “and they also have their Hindu goddesses. They sing to both.”

The Manganiyar Seduction had its U.S. premiere at the inaugural White Light Festival in 2010, receiving a rapturous reception. The New York Times described the “tumultuous…instantaneous ovation” that greeted the performers at the end of the show.

Roysten Abel was classically trained in Delhi’s National School of Drama and Britain’s Royal Shakespeare Company. He founded the Indian Shakespeare Company in 1995, and directed his first original production in 1999, Othello: A Play in Black and White, which won a Fringe First Award at Edinburgh before touring internationally. Abel’s subsequent work with such street performers as magicians, jugglers, snake charmers, and acrobats led to an invitation to develop and direct a play about Fellini in Rimini, Fellini’s hometown, and in 2003, he directed his first feature film, In Othello. Abel’s work with musicians in a theatrical context has resulted in two major productions: The Manganiyar Seduction and A Hundred Charmers (with 100 snake charmers), both of which have toured the world. Mr. Abel’s new work titled The Kitchen premiered in Bangalore in August. He is also creating an International Center for Contemporary Folk Performances in Jaisalmer, Rajasthan, scheduled to open in 2015. www.roystenabel.com.

Audience members are invited to mingle and enjoy a glass of wine immediately following the performances.

A post-performance discussion with director Roysten Abel and WNYC’s John Schaefer will take place on Friday, November 1 in the Rose Theater.

This presentation of The Manganiyar Seduction is made possible in part by The Fan Fox and Leslie R. Samuels Foundation, Inc.

Celebrated choreographer Akram Khan revisits Lincoln Center with the U.S. premiere of DESH, winner of the U.K.’s 2012 Olivier Award for Best Dance Work. Called “the most beautiful and confident work of his career” (The Guardian, London) when it premiered at Sadler’s Wells in 2011, DESH was inspired by Khan’s parents’ homeland of Bangladesh. It is the London-based choreographer’s first full-length solo piece and stands as a very personal exploration. To research the work, he took his talented creative team—including composer Jocelyn Pook (Eyes Wide Shut film score) and Tim Yip (Crouching Tiger, Hidden Dragon production design)—to Bangladesh to “live, smell, eat, drink, and sleep Bangladesh,” said Khan in a Sadler’s Wells program interview. “Bangladesh is, for me, man against nature. Constantly under threat with water, the cyclones and flooding. And yet they find new ways to live amongst the monster…that’s something that really inspired me.” With DESH, Khan also confronts our collective, universal frailty in the face of forces beyond our control, mining the dreams and stories that help us to survive and grow.

Akram Khan combines elements of modern and kathak dance to create boundary-crossing works that challenge conventional ideas of traditional dance. In addition to company works that have featured collaborations with the National Ballet of China and the London Sinfonietta, he has also created pieces for the Oscar-winning actress Juliette Binoche, the internationally-acclaimed ballerina Sylvie Guillem, and was chosen to choreograph and perform a section of the London 2012 Olympics Opening Ceremony. He is the recipient of numerous awards, including the International Society for the Performing Arts Distinguished Artists Award and The Age Critics’ Award. Khan’s company first came to the White Light Festival 2012 for the N.Y. premiere of Vertical Road, a work that won Khan the UK’s 12th Critic’s National Dance Award for Best Modern Choreography. www.akramkhancompany.net

White Light Lounge: Audience members are invited to mingle and enjoy a glass of wine immediately following the performance on November 7.

There will be a post-performance discussion with Akram Khan on November 6 in the Rose Theater.

This presentation of DESH is made possible in part by The Fan Fox and Leslie R. Samuels Foundation, Inc.

MetLife is the National Sponsor of Lincoln Center

Movado is the Official Sponsor of Lincoln Center

WABC-TV is the Official Broadcast Partner of Lincoln Center

Lincoln Center is committed to providing and improving accessibility for people with disabilities. For information, call the Department of Programs and Services for People with Disabilities at (212) 875-5375.

Programs, artists and prices are subject to change.