The amazing Shankar is back and with more tracks! That’s right the amazing Anoushka Shankar’s seventh album, Traces of You, marks a significant step along her pathway as a musician and woman. With the aim of bringing together a variety of cultural experiences and attitudes as organically as possible, she worked with London-based British-Indian producer Nitin Sawhney, particularly noted for fusing Eastern influences with electronica and, more generally, a non-didactic interweaving of Western and Eastern soundscapes for which London, Anoushka’s home and place of birth, provides the optimal environs.

Traces of You was initially a solely musical exploration inspired by the idea that everything in the universe leaves an indelible mark, or a subtle “trace”, on everything else it comes into contact with, and Anoushka drew on her relationships and multicultural lifestyle to trace a journey of love, change and loss. As it happened, life itself would leave traces on the album’s production. Having lost her father, legendary sitar player Ravi Shankar, during the process of recording, it was inevitable that her loss became the central focus of the song writing.

After mourning the loss of her father she also became occupied with raising Zubin, her young son. Intense joy, pain and sadness intermingled and Traces of You became Anoushka’s catharsis through a difficult period, leading ultimately to the greater emotion behind all the others: love. Three forms of love, love for her father, her husband, and her son, proved to be the ultimate inspiration for some of the deepest music Anoushka has yet written. She worked on Traces of You for over a year, conceiving it as a unified concept, an unending circle, from the first track to the last. 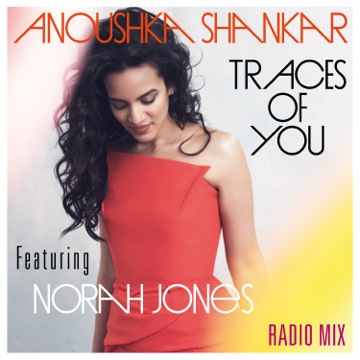 “I approached the album as a whole,” she explains, “as opposed to a series of songs. A lot of it happened unconsciously. Life took a journey of its own and the music followed that form. The sitar leads the listener through the album like a narrator.”

With this in mind, it is certainly notable that although the individual tracks are considerably shorter than traditional raga performances, a strong narrative strand is threaded through not only the three songs for which her half-sister Norah Jones provides vocals, but the ten instrumental tracks as well. Shankar’s central theme is that of the cycle of life – from her perspective as a daughter, mother and wife.

“Life goes on. Things end and things begin and our endings are not the ending because life goes on beyond us, and we go on beyond this life. It’s bigger than I can ever imagine and there’s a flow that connects everything, even when you can’t really understand it in the moment. A lot of the most painful things I’ve ever been through have led to some of the most beautiful things that have ever happened. I was quite aware of that kind of metamorphosis when making this record. There was a lot of pain, a lot of joy, a lot of beauty, a lot of sadness, and sometimes they were all completely mixed up together.”

It is filled with sensuality, but also makes an impassioned plea for us all to realize that despite our widely varying social, cultural, religious and geographical circumstances, our fundamental human experiences are broadly similar. Traces of You creates an uplifting soundscape that shimmers with the contagious power of hope.

Be sure to go get the album which is now out!