Fans have always wanted to see Ranbir Kapoor share the screen with his parents, actors Rishi Kapoor and Neetu Singh.  “Besharam” fulfills this wish.  Check out what Rishi and Neetu had to say about the movie!

Did you enjoy acting together as a family?
Yes very much so. We are all very busy people and do not always get time to spend together due to our separate professional schedules, so it was great to be able to spend time together on set and to work together.

How did you end up being cast for your role?
It was actually Ranbir who suggested to Abhinav that I play the role. After confirming his own commitment to the film Ranbir was discussing who could play a middle aged cop with Abhinav and he suggested me as I have rarely done it before.

The film’s trailer has received excellent comments, why do you think this is?
The trailer really captures the spirit of the film and manages to tease audiences with short clips showing the diversity of the action and comedy.

How much influence do you have over Ranbir’s choice of films?
He is an actor who has taken a less traveled route. He is choosing different films and doing films that are not the staple diet of film heroes. For that I give him credit. The choice of his films are totally his, all creative decisions are his, I have no contribution to that at all. People feel I chose his films, but it’s not so. I am just his father, not his manager. 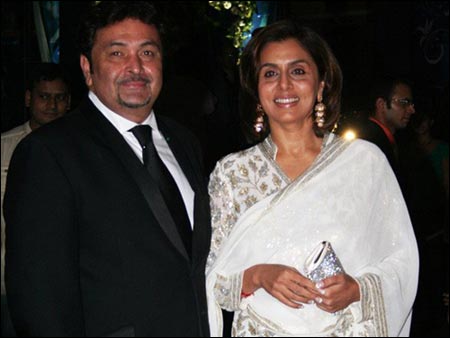 How did it feel to act with your husband and son in a movie?
I was overwhelmed when I heard we were going as a family to act in Besharam. My acting scenes came naturally from the start, as it was easy to act and be myself in front of them.

Can you tell us some details about the film’s narrative?
Of course. Babli (Ranbir Kapoor) is a street smart car mechanic living in a Delhi orphanage. He is charming and lives life to the fullest. He also steals cars to support his orphanage. He has no sense of right or wrong until he unwittingly hurts the love of his life, Tara (Pallavi Sharda). Babli realises that there is no right way of doing the wrong thing. Babli sets out to fix all the wrongs in his life and he continues to be shameless about it.

Your son, Ranbir Kapoor plays a very different role to his previous films, why do you think he was interested in playing Babli in Besharam?
I think Ranbir has done a fantastic job in his previous films and has managed to win many awards for his portrayal of a traditional Bollywood hero. However, I think he was keen to stretch himself as an actor, to explore new territory and to challenge himself rather than become too comfortable. His role as Babli is a very diverse role and requires a portrayal of many different emotions on screen, I think this appealed to Ranbir as he is always keen to try something new.

Is there a scene in the film that is particularly close to your heart?
I think the performance of the title track was a lot of fun for the cast and crew and is definitely a highlight for me. Ranbir suggested that we include the director and choreographer in the sequence, and even choreographed the sequence himself. It was a lot of fun to see Abhinav Kashyap get involved in the film in front of camera for a change. I think everyone got the chance to be a little Besharam that day.

What role do you play in Besharam?
Myself and Rishi play bumbling cops on the trail of Babli, trying to deal with his shameless acts.