More and more upcoming newcomers are hitting up Bollywood and one got to not only work with one actor but two great actors of the past!

Subhash Ghai’s upcoming film Kaanchi stars Kartik Aryan, who was earlier seen in Pyaar Ka Punchnama and Akash Vaani. Kartik got the opportunity to work with industry veterans Rishi Kapoor and Mithun Chakraborty. When he was asked about his experience of working with them, he said:

“My first scene was with Mithun Chakraborty Sir. I was speechless and I couldn’t say even say the dialogue! Just then Mithun Da sensed my nervousness and settled me down. He said, ‘Beta tu aisa kar, aisa kar’ and he explained the scene to me. I gained confidence and as able to give a good shot.” 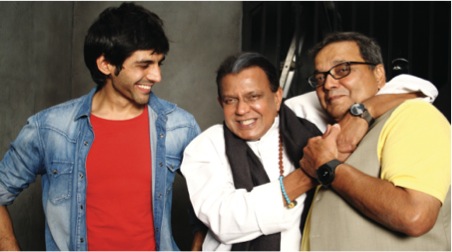 “When I see Rishi Kapoor performing I think to myself, will I be able to achieve the mastery that he has? I thank Subhash Ghai for giving me the opportunity to work with such accomplished actors.”

Kaanchi is a story of an innocent rural beauty under fire and her fight against power. The film is set to release on 6th December.

Looks like B-town has got themselves another cute little star!