There are rarely times in Bollywood where actors and actresses complement a movie that they are not a part of.  So, it is especially nice to see that “Warning“, India’s first underwater 3D film, has been generating quite a lot of praise from the Indian Film fraternity.  Everyone from celebrities like Shahrukh Khan to film lovers around the world are all going crazy for the trailer!

The thriller is set to hit theaters on September 27th.  Some celebrities that were ‘thrilled’ after watching the trailer include Huma Qureshi, Riteish Deshmukh and Dolly Ahluwalia.

“Warning” is a film about seven friends stuck in a life-threatening crisis. “Warning” tells you what happens when you don’t take warnings seriously. “Warning” is a warning in itself about what lies ahead, or rather what doesn’t… As Shah Rukh Khan tweeted, ‘Ab Gati Rodhak Pudhe Naa Aaahe!!’ 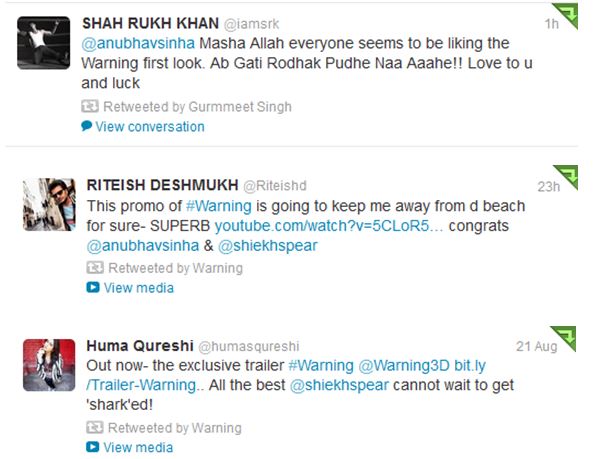