The title says it all! It sure doesn’t it? Don’t be fooled both Subhash and Rishi doing a dance? Subhash Ghai and Rishi Kapoor are coming together for a dance number after 32 years on the sets of his upcoming film Kaanchi. Their last film Karz had super hit songs that are remembered for their evergreen melody and the signature Karz tune. Subhash Ghai’s brilliant ideas involving the revolving stage in “Meri umar ke nau jawaanon” and the shadow play seen in “Ek haseena thi” have stood the test of time and proved their mettle with the audience time and again. 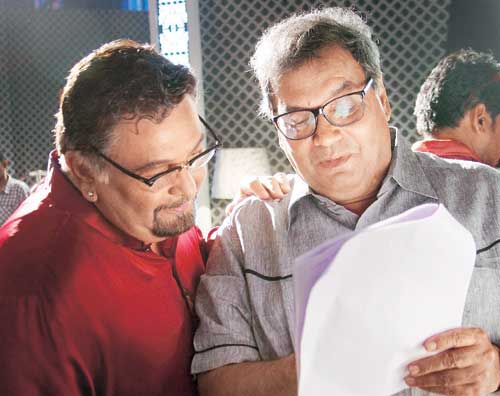 Now, 32 years later, Subhash Ghai and Rishi Kapoor are presently shooting in Film City in a mammoth set for a song in the latest Ghai film, Kaanchi. The choreographer for the song is Ganesh Acharya. A huge, grand set has been erected in the Film City premises only for this song. The cast and crew are really excited considering the previous history of this creative endeavor between Subhash Ghai and Rishi Kapoor. The stage is set for another chartbuster from Subhash Ghai! Get ready to see these two on the dance floor!

Kaanchi releases on the 6th of December. The movie stars Kartik Aryan and newcomer Mishti. The music of the film is by Ismail Darbar and Salim Sulaiman with lyrics written by Irshad Kamil.