Yash Raj Films are no strangers to film festivals, so it is no surprise that Yash Raj Films’ next “Shuddh Desi Romance” has been invited for the esteemed Toronto International Film Festival (TIFF) 2013 for the prestigious Gala Red Carpet Premiere. 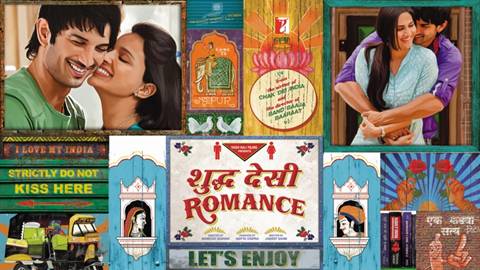 The grand screening will be attended by director Maneesh Sharma and writer Jaideep Sahni along with the cast Sushant Singh Rajput, Parineeti Chopra and debutant Vaani Kapoor. The Gala Red Carpet Premiere will be held on September 11th at the prominent Roy Thomson Hall with a 2000 capacity in Toronto, Canada.  With such a unique cast, expectations are high for the film.  Sushant broke into Bollywood with “Kai Po Che“, but had made his mark in India with Zee TV’s “Pavitra Rishta“.  Parineeti wowed audiences with “Ishaqzaade“.  So, fans will be interested to see how this new pairing plays out on the big screen!

“We are delighted to have Shuddh Desi Romance invited to the Toronto International Film Festival for the Gala Red Carpet Premiere. We believe the film is perfect for Toronto, as it is a film that is rooted in rustic India and the characters are very contemporary in their thought, which will no doubt appeal to the diaspora but also the more mainstream audiences. In fact since the announcement was made last night we have had a terrific response from the International media and business community all of whom are vying for the film already – that’s the power of TIFF.”

Shuddh Desi Romance, is a fresh and very real love story about the hair raising minefield between love, attraction and commitment. A romantic comedy that finally tells it like it is!

TIFF is among the top film festivals in the world and it is indeed an honor to be selected for such a screening. A publicly-attended film festival, nearly 400 films are screened at approximately 23 screens in venues across Toronto. The annual attendance at TIFF exceeds 300,000 from public and industry audiences.  Keep it locked to UrbanAsian as we continue to bring you all the TIFF details!